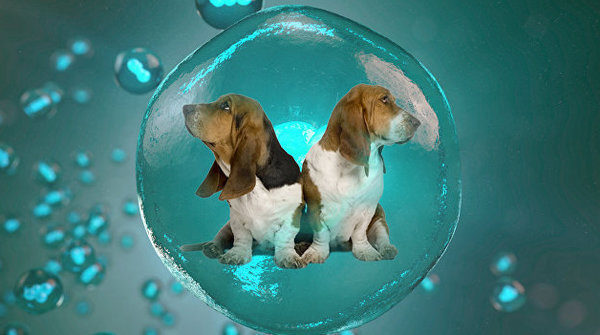 Seven mammals, which successfully cloned
A recent report by Chinese scientists about the birth of a cloned monkey did not surprise specialists, but caused concern in the community.

It means that science is very close to the genetic copy of a person. Here is a compilation of the most famous clones of mammals have successfully grown and even produced offspring, reports Rus.Media.

Mammals reproduce itself such by using a rather cunning mechanism: the conception occurs inside the body and develops the germ, which through weeks or months to grow ready for life outside the womb baby. It carries the genes of father and mother, therefore, never makes an exact genetic copy of one of them, that is, a clone.

Genetic copies of an organism are created naturally, when one egg is split in half or several times. The result is identical twins are born with identical genomes. To create a copy of another organism without the egg, you need artificial intervention. DNA from cells of an adult individual that you want to clone, put in another egg, cleansed from their own DNA. The egg with someone else’s DNA implanted into the oviduct ready for bearing females and wait the allotted time until the baby is born. Thus, in the cloning involved three different body: the DNA donor, the egg donor and the surrogate mother.

The first cloning experiments conducted in the 1950-ies over the frogs. To grow a clone from an adult specimen failed in 1962 in Oxford (UK). For these studies, the biologist John Gurdon (John Gurdon) won the Nobel prize.

Cloning — the process is very risky, because not every egg cell begins to divide, and not everyone is placed in a surrogate mother the embryo survives. This imposes restrictions on experiments with mammals, whose body moreover long developing. While cloning mammals is laborious and expensive.

As for people: in 2013, scientists under the leadership of Shukhrat Mitalipova managed to transplant the cell nucleus into a donor egg and force her to share. The embryo is a few days successfully developed, after which the experiment was interrupted to extract stem cells. Since the surrogate mother is not reached, strictly speaking, this experiment can not be called a clone.

The first cloned mammal, Soviet scientists under the leadership of Levon Chailakhyan from the Institute of biological physics USSR Academy of Sciences, as reported by the journal “Biophysics” in 1987. With electrostimulation biologists merged embryonic cell from the purified genetic material from the egg house mouse albino. As a result, the light appeared three mouse clones.

Cloned rabbits that were raised in 1999 in the research and production biotechnological center for animal breeding of the Russian Academy of agricultural Sciences.

Experiments on the cloning of animals has long attracted the attention of only a narrow range of molecular biologists. The public and politicians became interested in it in 1997 when British scientist Ian Wilmut unveiled the details of the experience with cloning sheep. The clone named Dolly. It was the only surviving specimen with artificial 277 embryos. Dolly left offspring, but lived only six years. Had to be put down because of arthritis and lung disease. Scientists speculate that Dolly aged prematurely.

The first cat clone was born after 87 failed attempts in December 2001 at the University of Texas A&M (USA). A female called Sisi from the initial letters of the phrase Copy Cat. DNA for her took the tri-color cat, Sisi was born white-brown. Scientists explained this by the fact that the color is determined rather by factors of fetal growth than genes. This experience has also shown that genetic copy may appear different from your model.

When Sisi grew up, took her home, one of the employees of the laboratory. The cat three times and gave birth to a perfectly healthy kittens. Recently, she was 15 years old, and this is another reason for surprise, since the main argument against cloning is that cloned embryos from developing painful individuals.

In may 2003 at the University of Idaho (USA) was born the clone of a mule named Idaho Gem. It took the Mare, and the donor of the genetic material was the Il — champion in jumping. From the clone had victories. In fact, the sponsor who funded the research, was engaged in breeding horses.

Three years later Idaho Jam participated in the competition with mules, born in a natural way. Finished third. It was reported that Il completed a career and contains to the private sector.

Then in the laboratory of reproductive technology in Italy was born the first cloned horse, prometea. Scientists have made 327 attempts before they managed to grow a clone.

The first clone dog was born on 24 April 2005 at Seoul national University in South Korea. It was the Afghan hound puppy, DNA obtained from ear skin of three males. Snappy, the so-called clone — the only survivor from 1095 embryos, which hoisted 123 surrogate female.

Because the project was headed by biologist Hwang Usok, found earlier in tampering with human stem cells, the scientific community has questioned and Snappy. However, independent research lab hired by the University to check the results of the experiment confirmed that the puppy is really a clone.

In Dubai (UAE), the Center for reproduction of camels on 8 April 2009 on light there was a 30-pound camel Injaz (in Arabic-“achievements”). She is a genetic copy of the camel, which died in 2005. Indias grew up healthy, fertile and in 2015 gave birth to a daughter.

In UAE cloning camels in demand in the sports industry

In January 2018, Chinese scientists from the Center for Primate studies at the Institute of neuroscience in Shanghai, announced the birth of two clones avansco macaques. The Chinese acted by the method of Dolly the sheep and modernized. Females Chung Chung and Hua Hua were placed in the incubator. Primates are completely healthy.

Commenting on the results of the experiment, one of its members, the biologist, M-Min (Mu-Ming Poo) said in an interview with Nature: “Technically there are no obstacles to clone a human”.