Soccer: Cristiano Ronaldo is suspended for five games for having pushed the referee 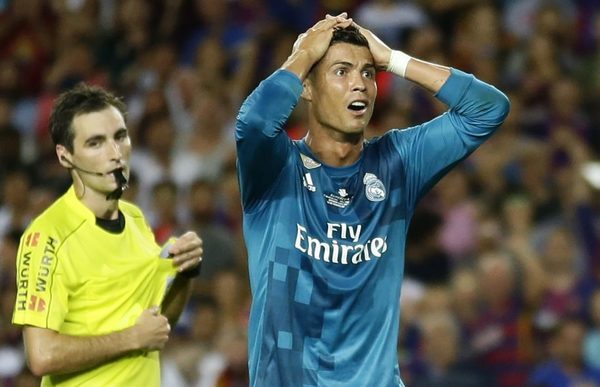 Cristiano Ronaldo has been suspended for five matches for pushing a referee following a red card for simulation in a victory of 3-1 for Real Madrid against Barcelona during the first leg of the Spanish Supercup.

Ronaldo has been suspended for one match following his red card on Sunday at Barcelona, and four more games to have slightly pushed the referee, Ricardo de Burgos Bengoetxea in the back, said the Spanish Federation of football.

Ronaldo will miss the return leg of the super cup on Wednesday in Madrid, in addition to four meetings of the Spanish League. Madrid begins its season Sunday against Deportivo La Coruna. His next three matches will be against Valencia, Levante and Real Sociedad.

Ronaldo and Real Madrid have ten days to appeal from the federation.

Still not at the peak of his form after an extended vacation, Ronaldo began the match for the Supercup on the bench and was sent into the fray in the 58th minute.

He scored with a shot from far away to get a lead of 2-1 to Madrid a few moments after Lionel Messi had tied it on a penalty kick.

But the celebration of his goal — when he removed his shirt and flaunts his muscles — has earned him a yellow card. Two minutes later, he made a foray into the opposition box and collided with defender barcelona’s Samuel Umtiti. Ronaldo was dropped in the hope of getting a penalty. Instead, the referee Of Burgos Bengoetxea has been awarded a second yellow card for a dive and expelled. Incredulous, Ronaldo has lifted the arm before approaching the referee and the push in the back with his right hand.

The federation ruled that the gesture of Ronaldo has violated article 96 of its disciplinary code, which states that the “assault minor” defined as “pulling, pushing and shoving” a referee, are punishable by suspensions of 4 to 12 games.