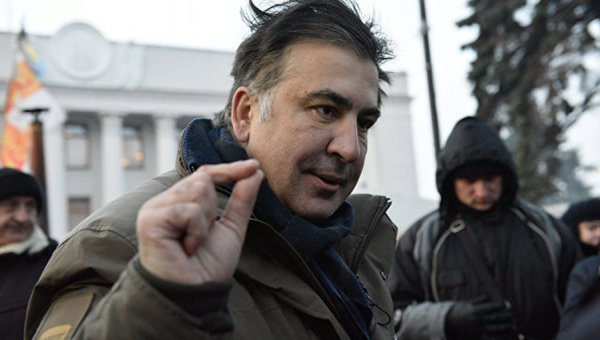 Supporters of former head of Georgia Mikhail Saakashvili force your way in October Palace in Kiev. Some protesters were injured, they received medical treatment at the scene. Information about the incident spread by the Ukrainian media.

Unhappy broke into the building of the October Palace, but then came out, citing reluctance to shed blood. Law enforcement officers warned the demonstrators that here is a children’s holiday, but that didn’t stop supporters of Saakashvili. The head of the National police of Ukraine Vyacheslav Abroskin talks about responsibility which waits for all people who have encroached on the health of guards.

Employees of national police risked his life in order to protect children. According to Abroskin, all those involved in this attack, people will be forced to answer for their actions. After the attack on the October Palace, the protesters marched to the Parliament building. They demanded the resignation of Poroshenko and all politicians who hold responsible positions in the country.

At a rally in Central Kiev, according to eyewitnesses, there were about a thousand people, all of them, under the “leadership” Saakashvili demanding the impeachment of Poroshenko and advocate for the resignation of the Prosecutor General of Ukraine Yuriy Lutsenko.