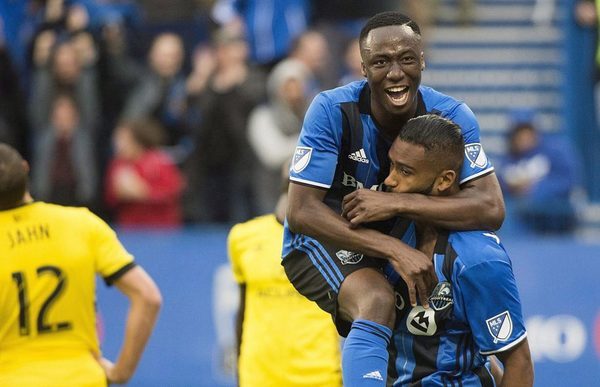 Photo: Graham Hughes The canadian Press
The players of the Montreal Impact Anthony Jackson-Hamel and Ballou Tabla celebrate a goal against the Columbus Crew on may 13, 2017.

The Montreal Impact and the young midfielder Ballou Tabla are in a stalemate.

The technical director Adam Braz has confirmed on Tuesday that the Impact has refused an offer of a transfer from a european team, as reported by the american network ESPN the day before.

Without going into details, Braz added that it was a team playing in the second division. It has, however, insisted that the team had received only one bid, while the source of ESPN argues that the Impact would have rejected multiple offers and that the team refused to enter into negotiations.

Visibly ruffled by the situation, Ballou, who is 18 years of age, preferred to stay home. He missed a session of fitness Monday and has decided not to stand in the Center Nutrilait for the training of the team on Tuesday.

“We had a meeting with him [Monday] and we expected it to be there today, explained Braz. We are aware that he has the ambition to go and play in Europe. It is clear. “

“We are not here to block a player who has this ambition. But it is important to understand that the club is making large investments in its academy. We talk about several million dollars. And we want to develop players who will help our team. But if there is a possibility of sale to an amount that makes sense, we will be open to negotiation. “

It is known that the English club Chelsea has already demonstrated an interest in Ballou. Other european clubs would also like to obtain his services.

According to what was suggested by Braz, it is the amount of money offered, which will be key to the transfer or not.