The 11th stage of the Tour de France: Marcel Kittel overtook his record 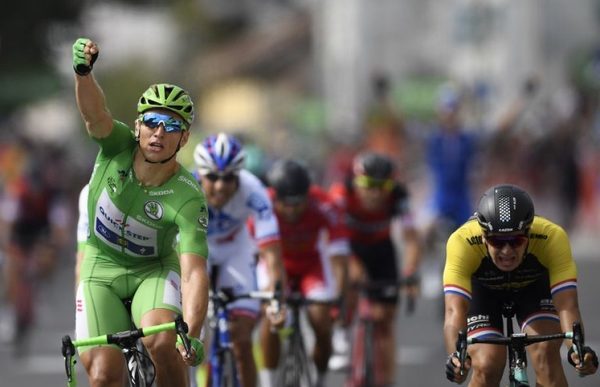 Photo: Lionel Bonaventure Agence France-Presse
The German Marcel Kittel, age 29 years, now has 14 stages of the Tour to his name since 2013.

The king of the sprint, the German Marcel Kittel, has removed his fifth success and exceeded his personal record in the Tour de France on Wednesday in Pau, before the entry in the Pyrenees.

The Tour offered a new sprint in the 11th stage on the eve of the arrival over the airfield of Peyragudes. But it now changes gear and waits for the match between the yellow jersey, the British Chris Froome, and its closest competitors, the Italian Fabio Aru and the French Romain Bardet.

If Froome, serene, is passed through the drops on the eve of the Pyrenees, his two opponents have had their share of bad news prior to the step-queen between Pau and Peyragudes.

For Aru, this is the fall of his lieutenant, Danish Jakob Fuglsang, one of many that have punctuated the day in the plain of the South-West. The recent winner of the Dauphiné was struck in the left wrist (scaphoid).

Their team-mate of Astana, the Italian Dario Cataldo, was for his part forced to drop in this fall (wrist too) occurred within the refuelling area.

For Bardet, it is only a cloud in a sky that was cloudless. The Auvergne is found on earth it also, on two occasions. Having no other apparent damage that a shock to one knee. But what will be the consequence ? “I’m glad to be free and to finish with the flat stages,” responded the climber, the AG2R La Mondiale team. “I hope it will. It is necessary to bend a little bit down and wait for better days. It was very nervous “.

The Spanish Alberto Contador, unfortunately, familiar with the falls in the Tour, has had his share of misfortune. At the threshold of the last 20 kilometres, the double winner of the event (2007, 2009) has tasted the bitumen. For the third time since the start of the Tour.

To escape the stress of the platoon, he had to leave to the front, as did Italian Marco Marcato, the Polish Maciej Bodnar, and the Belgian, Frederik Backaert from the output of Eymet.

The trio has been remote-controlled, less than five minutes. Bodnar has distanced his companions to 28 kilometres from the finish and resisted a long, long time. Up to 250 metres from the line.

True wheeler, the Polish has given the example to follow. It has also restored the smile to the team Bora, beheaded after the exit by the little door of the world champion, the Slovak Peter Sagan (exclusion), and the fall of the climber the Polish Rafal Majka (abandonment).

The success of his coup was compromised by the collaboration of other teams with the Quick-Step of Kittel. The Lotto, for the German André Greipel and Katusha, to the Norwegian Alexander Kristoff, have rolled their part, in the hope of seeing their sprinter to compete.

“If we let’s not, Quick-Step will not only the chestnuts out of the fire. They have already won four stages, the pressure is therefore on the shoulders of other teams “, had explained before the departure of the manager of Lotto’s Marc Sergeant.

To Pau, or Greipel (7th) or Kristoff (12th) have not played the first roles. Kittel was able to give up well before the line. He took the lead of over half-a-biking Dutchman Dylan Groenewegen.

At 29 years old, German now has 14 steps of the Tower on the counter. 14 wins in 30 bunch sprints played since its first participation in 2012.
From the start, he has been beaten only once in a bunch sprint, the French champion Arnaud Démare, Vittel (4th step).

If it continues on its launched, Kittel is able to equal the record of stage victories in a single Tour (8 success). The next appointment ? Romans-sur-Isère, next Tuesday.

On Thursday, the 12th step joined Peyragudes, after six ascents (including the Port de Balès classified outside the category) and the 214,5 km from Pau.

Froome knows the places. During the first visit of the Tour, in 2012, he had humiliated the future winner of the race, his team-mate Bradley Wiggins, in the meantime pointedly several times.

The line is installed this time at the end of the runway of the airfield, very steep (up to 16 %). For the yellow jersey, it is the opportunity to mark a little more the Turn of its footprint.

But the British, careful, has kept in advance of any triumphalism : “My main priority is not to allow anyone back in the standings. Of course, I will have an eye on Aru, who is only 18 seconds. I’m going to stick like glue “.