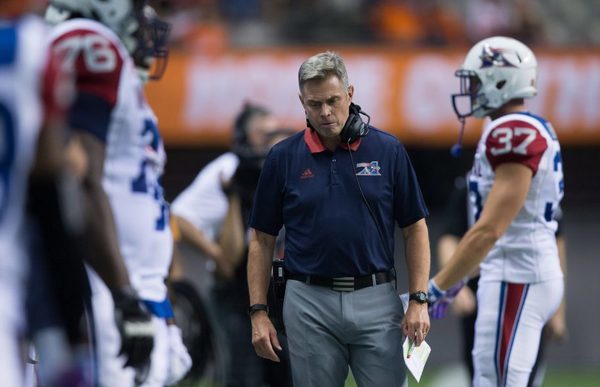 Photo: Darryl Dyck Archives-The canadian Press
The dismissal of Jacques Chapdelaine comes less than a year after his arrival at the post of head coach of the Alouettes.

The Montreal Alouettes have fired the chief instructor Jacques Chapdelaine, and one of his deputies, the coordinator defensive Noel Thorpe.

The news was confirmed Wednesday morning by the direction of the Alouettes.

The director-general Kavis Reed will be the acting until the end of the season as head coach, while Greg Quick, coach of the defensive line, will call the games on the defensive.

For his part, the former quarterback star Anthony Calvillo will be responsible to call the games in attack until the end of the season.

The Alouettes added that other coaches will join the group very soon.

The dismissal of Jacques Chapdelaine comes less than a year after his appointment to the position of interim head coach. He had been given the job permanently last December 14.

As Noel Thorpe, the season 2017 was her fifth as the co-ordinator defensive Alouettes. He was given the position of assistant to the head coach four years ago.

He joined the coaching staff of the Alouettes in 2002.

The terminations occurred a few hours after the co-owner of the team, Andrew Wetenhall, has said on Tuesday that the woes of the Alouettes were the responsibility of the players and coaches.

The team has won only three of its 11 matches since the start of the regular season.