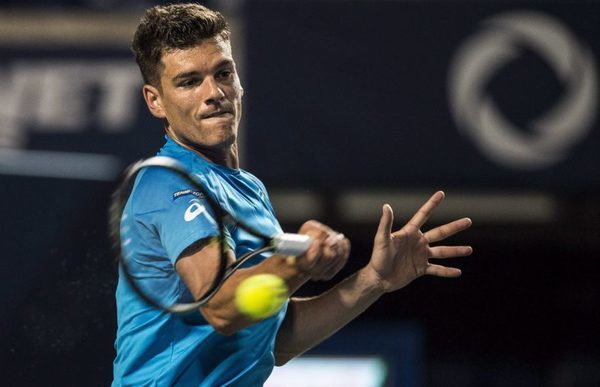 The Canadian Frank Dancevic has lost his chance to add to the canadian representation at the tournament of the Rogers Cup as he suffered elimination at the hands of the American Tim Smyczek in the second day of qualifications on Sunday at Uniprix stadium.

Dancevic, now 357th in the ranking of the ATP, has had a strong first set, especially the service, before experiencing a significant decline in plan to this chapter to the next round.

Smyczek has made two breaks in the third set, at the third and seventh games, and was never threatened in the service.

This means that the main board will bring together five Canadians, Milos Raonic, 6th seeded, Vasek Pospisil, Peter Polansky, Denis Shapovalov and Brayden Schnur. The last four have received a pass of the organizers.

The French Pierre-Hugues Herbert, first head of series of qualifications, and Vincent Millot, the Israeli Dudi Sela, the Italian Thomas Fabbiano, the Slovakian Norbert Gombos and the American Reilly Opelka also got their pass to the main table.

Kyrgios and gael Monfils as the curtain rises

On the first afternoon of activities on the centre court of the Uniprix stadium, Monday, could be the scene of a multitude of sparks, but for different reasons.

The Australian Nick Kyrgios, whose passage to Montreal in 2015 was held in the controversy, will have the honor of launching the hostilities in the face Serbian Viktor Troicki.

Immediately after, fans will have the opportunity to see the work the flamboyant frenchman Gael Monfils, against American Steve Johnson.

In the evening, the first match on centre court will bring together two giants, the American John Isner, ranked 14th, and the Argentine Juan Martin del Potro. This duel will be followed by the clash Pospisil and Polansky at the end of which the winner will face Switzerland’s Roger Federer, second seeded, Wednesday afternoon.

Schnur will play as his match of the first round, on the National Bank court, against veteran frenchman Richard Gasquet in the late afternoon.

Ranked 16th head series, the talented but enigmatic Kyrgios had suffered the wrath of the ATP in the wake of remarks disparaging to the place of Switzerland’s Stanislas Wawrinka and remarks rude to a young pick-up of balls during a match of the second round.

All this had prompted the ATP to impose Kyrgios fines total of $ 12,500 and to initiate a notice of inquiry.

The next day, during a clash between Kyrgios and Isner on the National Bank court, the montreal public, yet warm at the annual meeting of the Rogers Cup, had been heckling Kyrgios and applaud his blunders. After his defeat against Isner, Kyrgios had even been insulted by some amateurs.

In addition, the organizers have confirmed that the Luxembourg’s Gilles Müller, tombeur of Rafael Nadal at Wimbledon this year, withdrew Sunday.

Toronto — The Canadian Carol Zhao has been eliminated by the Russian Ekaterina Alexandrova in the second round of qualifying at the Rogers Cup tennis Toronto, Sunday. Alexandrova, 90th racket in the world, has had the best 6-2, 6-3 in the face of Zhao, Richmond Hill, Ontario. 22 years old and rated only 414e in the world, Zhao has saved only two of the six balls of breakage that it has granted to its rival, and she conceded the victory after 62 minutes of play. This means that Eugenie Bouchard, Françoise Abanda and Bianca Andreescu will be the only representatives from Canada in the main chart, in Toronto.