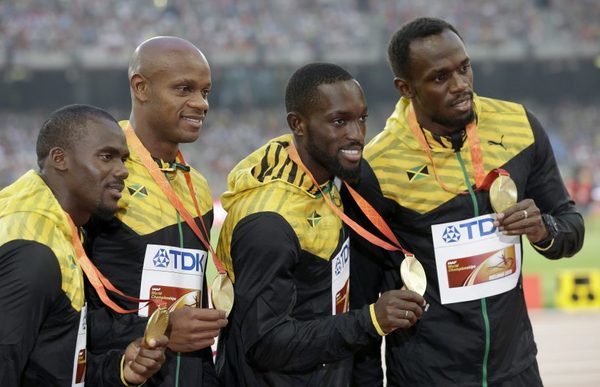 Photo: Petr David Josek AP
The team of jamaica in the relay 4 x 100 metres, who has won the race with a time record of 37,10 seconds. To the left, Nesta Carter.

Lausanne — A call for the olympic title in 2008 removed to Usain Bolt and relay team jamaican will end up before the courts in November.

The Court of arbitration for sport (CAS) has revealed that the sprinter Nesta Carter will be contesting his disqualification by the international olympic Committee, on 15 November. A verdict is expected some weeks later.

Carter has failed a doping test last year for a stimulant prohibited — the méthylhexaneamine — in the context of the reanalysis of a urine sample of the Beijing Games in 2008. He and Bolt were teammates in the relay 4 x 100 metres, who has won the race with a time record of 37,10 seconds.

Carter ran the first relay, and Bolt the third within a team complemented by Michael Frater and Asafa Powell.

The disqualification of Carter and the relay jamaican occurred in January, spoiling the perfect slip Bolt of the hat-trick of gold medals — 100 m, 200 m and 4 x 100 m — at three consecutive olympic Games from 2008 to 2016.

Carter has also teamed up with Bolt during the three consecutive victories of the relay at the world championships, from 2011 to 2015. They were also teammates when Jamaica achieved another world record in the 4 x 100 m at the 2012 olympic Games, at 36,84.

Bolt had said in February that he was “not sad” turn over the coin, but ” was waiting to see if Nesta was going to make a call.”

The legal team of Carter could ask Bolt to appear as a witness at the hearing, which will likely take place in Lausanne, Switzerland, host city of the CAS and the IOC.

Dozens of athletes have had positive tests in the framework of the program of re-analysis commissioned by the IOC with the use of new tests that are more accurate on samples stored since the olympic Games of Beijing in 2008 and London in 2012.

Most of the more than 110 cases involved steroids and athletes of the former soviet republics. The case of Carter was the only one who was Jamaica.