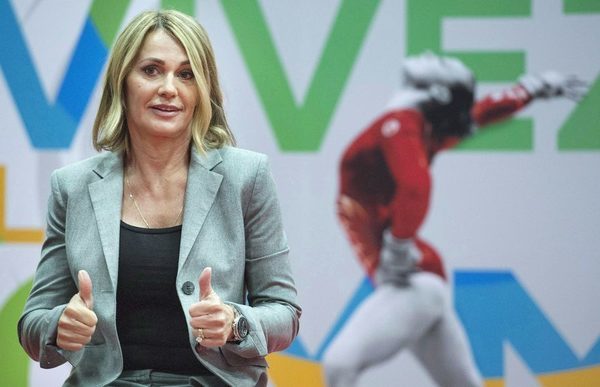 Nadia Comaneci, the queen of the 1976 olympic Games, wants to see Montreal live to the rhythm of the gymnastics during the next week.

Forty-one years after it has become an icon of the Montreal Games, Comaneci was back in the city that has changed his life in the framework of the 47th edition of the world Championships of artistic gymnastics, which will begin Monday.

The event, which will take place over a full week at the olympic Stadium will host 400 athletes — 155 women and 245 men — from 71 different nations.

“This week, people will talk about only of gymnastics, said Comaneci, a spokesman for the event, at a press conference Sunday. I am certain that there will be other things that will happen during this week, but more importantly, it will be the gymnastics.

“I’m so happy to be part of this unbelievable sport. “

Comaneci became the first gymnast in olympic history to get a perfect score for her performance on the uneven bars. She won a total of three gold medals, one silver and one bronze in Montreal while she was only 14 years old. She is the youngest gymnast to have won an olympic gold medal.

“People talk about the famous note-perfect all the time, said Comaneci. Many times, when I meet people and they have done something well, or that they are happy about something, they call it a “Nadia” “.

“It is something that will always get stuck to the skin. My life has been defined by the feat that I have accomplished there. “

The event will begin with three days of skills, followed by four days of finals with 12 world titles will be at stake.

The organizers claim that over 50,000 tickets have been sold, eclipsing their initial goal of 37 000.

“It is the cream of the cream, the best gymnasts in the world are gathered in Montreal, spoke of Kyle Shewfelt, gold medallist in canada in the olympic Games of Athens in 2004. Several legends will be present and others yet to be born. “

Some of the athletes the most well-known will be the competition.

On the ladies side, there are the Dutch Sanne Wevers, who won the gold medal in the team event at the olympic Games in Rio last summer, the Romanian Catalina Polor and Oksana Chusovitina, 42 years old and a native of Uzbekistan.

The favorite of the public, Simone Biles, of the United States, will be absent, since she took a year off from the competition.

On the men’s side, the Japanese Johei Uchimura is in search of a seventh title general consecutive world Championships.

But Comaneci says that the situation is conducive for the younger gymnasts known less and less who wish to make their name, just as she has done.

“This is a new generation, 60% of which are new gymnasts “in the competitive circuit,” added Comaneci. The fact that Simone takes a break from racing for a year, while the world may have the chance to win the overall title. This is what makes this competition so exciting. On paper, we know what the athletes are capable of, but they have to deliver the goods. “

The olympic Stadium has been transformed and has 10,000 parking spaces specifically for the occasion. The organizers have built a wall of 130 meters long and 18 meters high in order to create a more intimate atmosphere in the central space, which can usually accommodate 55 000 people.

Add to that a giant screen is 10 tons, the luminaires and speakers. The chairman of the committee on organization, Richard Crépin, asserts that it is a mix between a gymnastics competition and a rock concert.

“We’re crazy, he added. Gymnastics is a wonderful sport and we don’t enough of the front. We do not do this kind of event on a regular basis. It is very difficult, especially about the financial plan. “

Crépin, admitted that the project cost $ 14.5 million to organize. A little more than half of the costs were financed by the public sector.