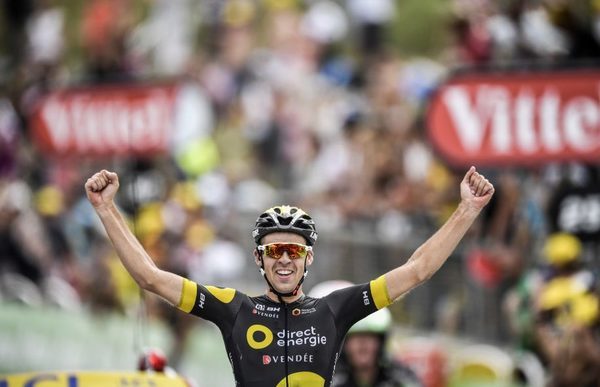 Station des Rousses — In favor of an acceleration that has allowed him to outdistance his rivals on a small mountain road that is better adapted for goats than for cyclists, Lilian Calmejane was awarded the eighth stage, which ended at the ski resort of les Rousses in the Jura mountains to earn his first victory in his first Tour de France.

Calmejane, of the French team, Direct Energy, has made fi of cramps on the final ascent to ultimately prevail on the occasion of the second visit of the Tour to les Rousses. This is the second victory of a French rider in the Tour this year, after Arnaud Demare at the 4th step.

The overall leader, Chris Froome, finished in a pack later, but he retained his yellow jersey before a second day of climbing, even more hard, in the mountains of Jura, on Sunday.

The day of Froome, however, has not been free of incident. During a descent, in a right turn after the second of the first three climbs of the stage to the departure of Dole, the triple champion of the Tour has made a straight, but it has not fallen of his bike and was quickly able to regain the peloton.

Calmejane has resisted the Dutch rider Robert Gesink, on its heels, when the last climb to the finish. The victim of cramps result of its efforts, Calmejane had to slow down and getting up from his seat to stretch his legs in the last section, and then he clamped teeth down to the line.

“To win solo like this is unbelievable, said Calmejane, who also won a stage at his first grand Tour, the Vuelta Spanish, last year. It is everything I dreamed of. “