The Impact tilts against Toronto 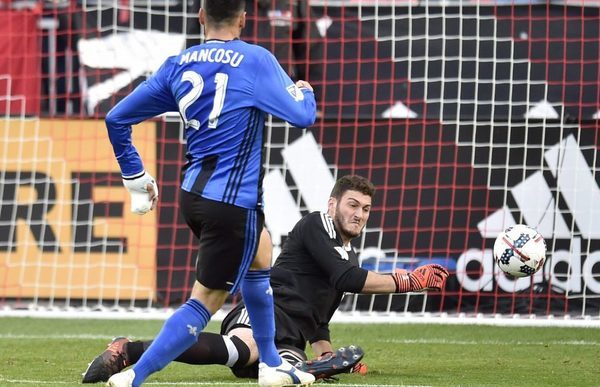 Photo: Frank Gunn, The canadian Press
The Impact forward and Matteo Mancosu has knocked at the door several times and could have scored at least two goals, but he stumbled to the keeper of the WCC, Alexander Bono.

Toronto — Already eliminated from the playoffs of the MLS, the Montreal Impact has not managed to spoil the party in Toronto.

Jozy Altidore scored the only goal of the match and the Toronto FC celebrated its title in the regular season in shutting out the Impact, 1-0, Sunday evening at BMO Field.

The men of Mauro Biello had signed only a single victory in their eight last games, but they had defeated their eternal rivals, 5-3, on September 20. A few weeks later, the Impact (11-16-6) has tried everything, but several opportunities squandered, came to haunt him.

Despite 18 shots on goal, five of which are framed, Montrealers have been able to avoid the affront to be laundered, and striker Matteo Mancosu is likely to be the first to have nightmares. The Italian has knocked at the door several times and he would have been able to score at least two goals, but each time, he missed vein and meeting the custodian of the TFC, Alexander Bono.

Altidore, meanwhile, has completed a game rather lucky to drag the ball to the right of the goalkeeper Maxime Crépeau and into the net in the 16th minute of the game. The striker, Toronto FC was a few feet to be out of the game, but a video viewing confirmed that it was detached from defender Laurent Ciman at the right time.

Toronto FC (20-5-8) was already guaranteed to finish in the first rank of the Association Is, but he took the opportunity to match the highest total of points earned in the standings by a team in a season (68). The record had been established by the Galaxy of Los Angeles, in 1998.

The Impact will conclude its season by welcoming the Revolution of New-England, Sunday afternoon, at Saputo Stadium.

Missed opportunities on both sides

While the two canadian formations are pointing in opposite directions, they have, however, offered a good show in the first half.

Marco Delgado was the first to test the goalkeeper, as early as the sixth minute of the game. After you have accepted a delivery of Justin Morrow, Delgado, positioned at the edge of the surface, took a violent hit on the right foot, which was hit by the full force of the horizontal bar.

It was only a postponement for the local team, who opened the scoring in the 16th minute. Delgado was once again at the heart of the sequence, picked up the ball before turning and attempting a pass on the right wing. The ball, however, hit the defender Shaun Francis before landing directly at the feet of Altidore. Just game, it has surprised Crépeau a good low shot to put TFC ahead 1-0.

Mancosu has wanted to bring back the Impact to a tie three minutes later, but he redirected a pass from Blerim Dzemaili just to the left of the net for Toronto. In the 20th minute, Mancosu came alone in front of Bono, but this time, it is the goalkeeper who had the last word, blocking the shot of the Italian with his hands.

The Impact has not been able to level the score and it has received a fourth loss in a row.