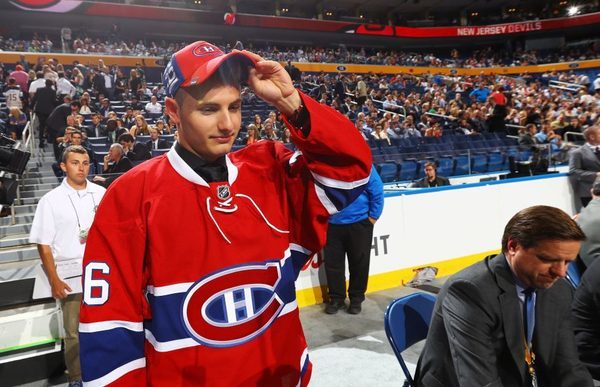 The formations of the three major leagues of junior hockey in Canada live in a perpetual dilemma. On one hand, they want to succeed and, to do this, they need experienced players and established. On the other, they have the mandate to develop the best possible hockey players to the NHL, even if you lose before term. The Knights of London are well placed to know.

In recent seasons, the formation directed by Dale Hunter in the junior League of Ontario has seen from to 19 players as good as Bo Horvat, now with the Vancouver Canucks, and Mitchell Marner, who seems to have made his niche with the Toronto Maple Leafs. However, this is the next could well be Victor Mete, with the Montreal canadiens.

The young defender ontario continues to amaze, to the point where, among the Knights, it seems ready to go forward without a key player who, in principle, should play a fourth season in London, and who was in the habit to accumulate minutes on the ice with all the sauces.

“For now, we plan our lives as if he will not come back,” admitted Dylan Hunter, son of Dale and assistant coach at the Knights, telephone interview with The canadian Press on Thursday. It is always said that we are here to develop players for the national League. This is our job. If it is not, we would lose a big piece. Regardless of what will happen to him, we are proud of him. “

Mete has drawn attention from the very first days of training camp when Claude Julien has moved to the left side of Shea Weber. He has surprised observers, and even his veteran team-mate, with his talent, but also by her presence.

“He is very calm for his age, especially in a market like this. It is really very well behaved until now, ” said Weber in the locker room of the team at the Bell sports Complex.

If he intended this description to Weber, Dylan Hunter acquiescerait probably, because this are such qualities, according to him, that have allowed to Mete to climb up the ladder at high speed within the Knights as soon as his campaign’s initial, in 2014-2015.

And the back of 19-year-old appears to want to achieve the same feat with the Canadian.

“On his arrival, he showed himself to be receptive to everything that we wanted to teach him,” recalls Hunter. And there is no possible doubt on its level of competitiveness and character. He is showing cold-blooded, it is asked, it is capable of evaluating, and it is this that has powered up within our first duo of defenders before the end of his first season. “

“He is a leader who leads by example and speaks when he deems it to be necessary, has also entrusted Hunter. On the ice, Victor is so smart that it can be an excellent partner for any other defender. I would not say that I was surprised that it is mutated with Weber, but maybe a little by the way in which it is adapted. “

By the end of the calendar preparatory, Mete will have the opportunity to play at least one more game at the Bell Centre to show that he deserves his place with the team that was selected in the 4th round, 100th in total, in June 2016. If we rely on the training session held on Thursday in Brossard, it is plausible to think that Mete will evolve with Jordie Benn.

When asked whether he wanted to go out Mete of his comfort zone, Claude Julien acknowledged that it was an element among many others in his decision.

“There’s that, but also, I don’t want to label it as the partner of Webby. During a season, we change the pairs of defenders, and we want to see how he reacts to this situation, ” said Julien.

“We are really pleased with his camp so far, and we want to know a little more about it, then confessed the head coach of the Canadian. There’s a good chance that he will play tomorrow [Friday], and we need to evaluate it before making a decision about it. The only way to know is by making it play. “

Mete sees the days that pass and that will allow him to approach his dream of playing in the NHL. He tries to keep a cool head and not be too packed. “All I have to do is play like I do since the beginning, and not to fall into bad habits. “