The Montreal Impact officially eliminated from the playoffs 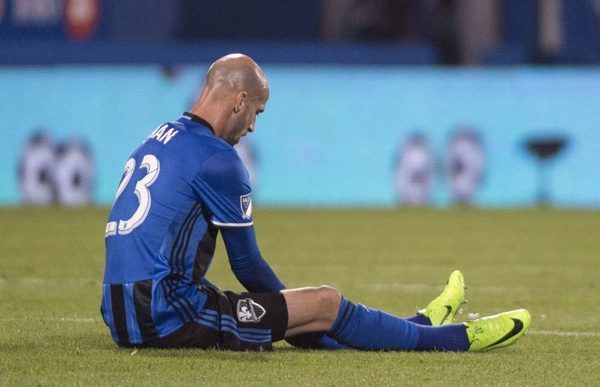 The Impact has never recovered from a first half of the season difficult.

The Montreal Impact has officially been eliminated from the playoffs, Saturday, following a victory of 3-0 for the Red Bulls to New York to face the Vancouver Whitecaps.

Daniel Royer scored in the first half, and then Bradley Wright-Phillips and Felipe have widened the gap in the second half, nailing the coffin of the Impact and ensuring the participation of the Red Bulls to the series of the MLS.

This is the first time since 2014 that the Impact will not participate in the playoffs of the MLS. Under the orders of head coach Mauro Biello, the Blue-white-black had been eliminated by the Columbus Crew in the semi-finals of the East in 2015 and by the Toronto FC in the final of the East in 2016.

The Impact has never recovered from a first half of the season difficult.

After a sequence of four victories which has allowed him to rise above the red line in August, the Impact collapsed by losing seven of its eight meetings following, including four of the following.

The Red Bulls had not done better since the beginning of the month of August, who had not won in their last eight outings (0-3-5) before coming to the end of the Whitecaps, Saturday at Red Bull Arena.

We expect that changes in Impact during the off-season. Rumors have surfaced in recent weeks according to which Biello and his deputies have already been notified that they will not be back in 2018. The former Italian defender Alessandro Nesta is being tipped to lead the team next season.

Nesta is currently head coach of Miami FC in the NASL. He had a distinguished career as a player in Italy and has played in 31 games with the Impact in 2012 and 2013.

Impact president, Joey Saputo and technical director Adam Braz need to meet with the media Tuesday during a press conference surrounding the contract extension given to midfielder Ignacio Piatti.