The phenomenon of the onset of sudden darkness 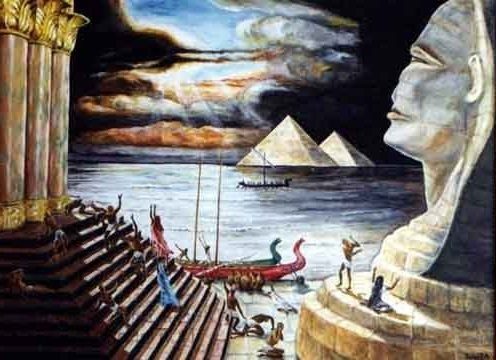 The phenomenon of the onset of sudden darkness
Human history remembers a few occasions when the land sank inexplicable pitch darkness.

Egyptian darkness, which lasted three days, is mentioned in the old Testament, as one of the miracles performed by the prophet Moses, reports Rus.Media. However, this phenomenon was observed later, including in our time. In General, the history of mankind remembers a few occasions when the land sank inexplicable pitch darkness. In ancient times, this phenomenon was regarded as divine punishment, today it belongs to anomalous phenomena. However, in our days, despite all the advances of science, no one was able to give him a reasonable explanation.

If to speak about modern times, the first documentary data about the suddenly darkness refer to the beginning of the XX century. 2 APR 1904 underground station in Wimbledon (London) suddenly plunged into an impenetrable darkness. It is clear that this event caused considerable confusion among passengers and station staff. The darkness lasted for several minutes, then as suddenly vanished. The public demanded an explanation from the authorities.

To hush up the scandal failed, too many people have witnessed strange events. And the city authorities appealed for help to the scientists. A few days later on the strange scene, the experiment was conducted. Hastily called experts tried to simulate the situation to find an explanation for what happened. However, to reproduce the same darkness failed because the participants could distinguish in a new artificial the dark silhouettes of objects and people. And the darkness enveloped 2 APR station, was truly impenetrable.

Not finding this reasonable interpretation, scientists have suggested that some gas escaped from the earth’s interior, caused a temporary blindness of the people that were in insufficient ventilated area. However, this version proved to be untenable since the medical examination did not find witnesses to the incident no signs pointing to injury to the eyes. The question, as they say, remains open…

After a few years, “Egyptian darkness” has covered the us city of Louisville, located in Kentucky. It happened March 7, 1911. about 16 hours. At that time in a city lived more than 50 thousand people and, therefore, to ignore this fact and present it as a falsification or deception was impossible.

It is interesting that, in talking about their feelings, the people Lusulu recalled particular about the curvature of space. The darkness also seemed to many accutrol: if air was condensed, and to move it had with some effort, as if under water.

And one more very interesting detail. Being in absolute darkness, Louisville smokers, of course, began to get a match. Later they said they heard broke their lighted matches, as the flame burned his fingers, but the light did not arise!

Darkness slept in an hour. Frightened citizens rushed to restore order, which in that time has broken. People who dare to move in complete darkness, showed himself far enough away from the places where originally were.

After some time of living in Louisville came into the groove, but the citizens still retained the memory of the extraordinary descent of the infinite darkness…

Another surprising feature of this phenomenon was July 16, 1957. in the French city of Arles. A victim of the anomalies of this time was 54-year-old woman who worked as a nanny. As usual, around noon, Madam Wife took the baby for a walk. In the city Park she put the stroller with a sleeping baby under a tree and sat on a bench nearby. Subsequently, the woman said that the lights went out all of a sudden, like the time the power went out. At the same moment cried, woke up the baby. Drawing a carriage, Madame Genis found the baby to touch and hugged him, trying to calm down…

So she spent about a quarter of an hour, and suddenly the darkness disappeared, but the Park is solar noon,-that was why the evening!.. Placing the baby in the stroller, the woman hurried home, where they found their employer in tears. It turned out that the babysitter and the child was absent for three days! The police and volunteers turned over this time the city upside down, but found no trace of the missing…

As Madame Eugene was known as a responsible, serious and even-tempered lady, her impressive story to believe. In addition, a supply of diapers for the baby were intact, a bottle of milk – full, and other signs testified to the recent exit from the house.

To explain what happened could not and now, but there is a new fact: in addition to the already known properties of pitch darkness affects the passage of time.

The next time this phenomenon was demonstrated in 1979. in the foothills of the Gissar range. Four climbers have camped out there for a cloudless warm evening. They have set up a tent and began to build a fire, when suddenly the darkness was coming on people. Fortunately, all four climbers were in the vicinity and was able to grab his hands. Friends shouted, but couldn’t hear myself. The impression was that each was covered with black soundproof hood…

Strange Eclipse lasted, the feelings of people, five minutes after that, darkness abruptly slept. In the eyes of the friends was hit in the evening sun, the clock was around noon. When, downstairs, the climbers arrived in the main camp, they were surprised to learn that there was no longer a half days and rescue teams are looking for them in the surrounding mountains…

Attempts to explain the mysterious dark

Modern science is unable to explain the phenomenon of total darkness, but thanks to the collected facts can speak about certain laws. The absence of light is almost always accompanied by temporal and spatial violations. As you know, light waves are electromagnetic oscillations. Because the Land surrounds a powerful electromagnetic field, then it is possible that the visible part of light spectrum shifts in such a state that the human eye does not catch.

However, the causes of such violations is not clear, not understood by scientists of the curvature of space and time at this point. That is, the so-called Egyptian darkness – a phenomenon that is not amenable to study. While he can only observe and construct various hypotheses. The only thing scientists suggest, in this case it is not necessary to do anything, much less try to move. According to the latest data darkness lasts not long, at least for those who are in it…