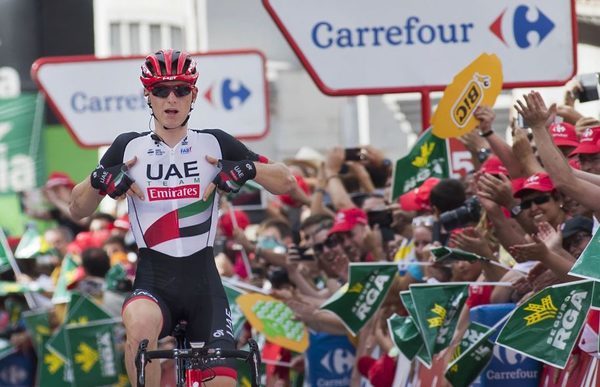 Cuenca, Spain — The Slovenian Matej Mohoric has easily won the longest stage of the Tour of Spain and Chris Froome remains in the overall lead.

Mohoric took control of the race on the last climb and raced to the victory after a winding descent which has crowned the 207-kilometre stage between Lliria and Cuenca.

The winner has crossed the finish line 16 seconds ahead of the group of riders that made the hunt. The Polish Pawel Poljanski finished second and the Spaniard Joaquín Rojas took the third position.

Fourteen riders escaped early in the day and all have ended in less than three minutes of Mohoric.

“It’s amazing, it’s been a long time since my last great victory, said Mohoric. I have always worked hard and done my best, but it’s great to get the win. “

Froome finished the stage almost nine minutes behind the day’s winner in the company of his teammates from team Sky and the rest of the pack. This has been sufficient to maintain its priority of 11 seconds. “We have always kept control,” stressed Froome.

The Colombian Johan Esteban Chaves Rubio is second in the standings, and the Irishman Nicolas Roche is third, 13 seconds behind the winner of the Tour de France. Mohoric, a member of the team, Emirates has climbed to the 38th rank.