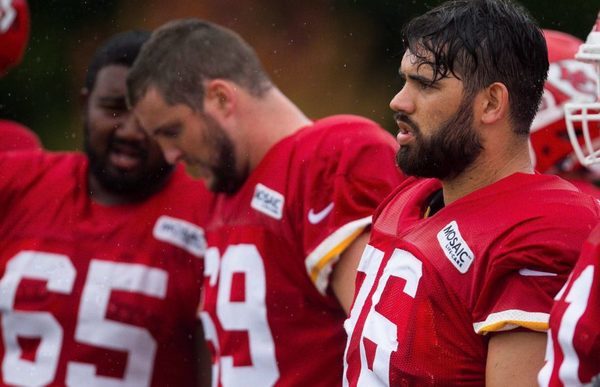 The native of Mont-Saint-Hilaire was signed in February a contract extension 42.25 on million for five years with the Chiefs of Kansas City. There was a bonus to the signing of 10 million, and more than 20 million are guaranteed.

But about three months later, a decision of the Chiefs reminded the future doctor how football can be cold in its economic aspect.

“Jeremy Maclin [a former winger spaced from the club] has just been released, and it was among the best-paid players of the team, said Duvernay-Tardif. It will give me stability for a year or two, thanks to the way in which are structured the contracts, but after that, it is necessary to prove that you are worth the money that they have invested in you. “

The athlete of 26 years had taken a flight in economy class from Montreal to Kansas City to sign the extension. The next day, he took a plane to reconnect with her studies in medicine, he is expected to complete in 2018.

“In some ways, it’s wonderful, but I want to stay the same guy, said Duvernay-Tardif. I have most of the same friends as before all of this, and every time my ego shows up a little the tip of the nose, they bring me back to earth. I try to set aside the distractions and put all the money aside. “

Duvernay-Tardif must pocket 690 000 $ for completing the covenant of 2.35 million over four years that it has agreed after being chosen in the sixth round in 2014, after having shone with the McGill Redmen.

The offensive lineman has established a top staff with 14 starts last year, but he says that the expectations will now be even greater.

“I have to aim for perfection and consistency,” he said. I feel this pressure, but at the same time it is something that I love. “

This year, Duvernay-Tardif has worked in geriatrics and trauma to the emergency, and he recently learned anesthesia in a hospital in Montreal. He also finds the time to train and make trips to Kansas City, for a minicamp mandatory, for example.

Duvernay-Tardif must report to the camp on a regular Chiefs on the 27th of July. He says of juggling the medicine and the football because of their similarities.

“In football, one learns to manage the pressure coming from different situations, and how to work with teammates from various backgrounds,” he said. As a future doctor, a good grasp of this reality will make me improve. “

When he has taken part in his last game, Duvernay-Tardif wants to become a doctor in the emergency room.

“I worked for two months in emergency in 2015 and two other months this year, he said. I love the pace, the adrenaline that comes with it, the fact of not knowing what will happen by the door. I love this challenge-here. Sometimes, it is just necessary to know the physiology, the anatomy to make split-second decisions that can save a patient’s life. “

And accept that sometimes the outcome is the death of a patient, in spite of all the treatments provided.

“I have not seen a single patient die and it is hard, because all your concentration is on this patient,” he said. And when the team decides that it is over and that we cease the manoeuvres of resuscitation, you think “Oh my God, the family is just next door, and they do not know nothing”.

“It is difficult to live it and then move on to a patient who has a fracture of the nose. I think this is where you need empathy for the patient because, if you develop the sympathy, and that it affects your emotions, it is hard to make the transition, to move on to something else. “

Once again, this is a lesson that football has helped to teach him, ” says Duvernay-Tardif.

“Each week, there will be a loser, and the most important thing is to bounce back quickly, to turn the page and learn from your mistakes,” he said. I think that in the emergency room there is a little bit of that… It is necessary to quickly move on to other things, deliver the same kind of empathy and focus on the next patient. “