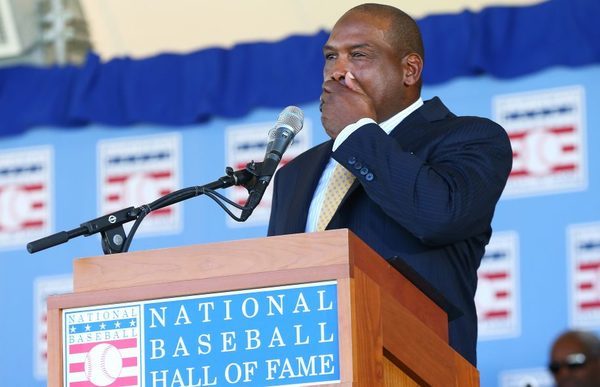 Since his election to the hall of fame of baseball, last January — and even before —, Tim Raines has never ceased to say how much Montreal occupies a large place in his heart.

Some 10 days after his induction into Cooperstown, he once more thanked the Montrealers have supported all these years.

“From the moment I arrived as a teenager at 19 years of age in 1979, until the standing ovation that made me warm to the heart during the opening game in 2001, I have always felt at home in Montreal, he said in a press release put online by the site ExposNation. You have accompanied me during all my ups and my downs, and you have treated me and my family, like yours. “

“As a Montrealer, I have the red, white and blue of the Expos tattooed on the heart, and I dream to be there again in a opening match. My family and I thank you from the bottom of my heart for all your support. We share this honour, the Temple of fame with you. “

Raines was elected to his 10th and final year of eligibility in January of this year. His plaque was unveiled during the induction ceremony official, the 30th of July last. It is decorated with the cap of the Expos, in the uniform of which he spent 13 of his 23 seasons in the Majors. Only Gary Carter and Andre Dawson before him, have been inducted as members of the Montreal Expos.

At the beginning of his speech in Cooperstown, and Raines has attempted to thank them in French for the montreal supporters, of which several hundreds had come on the spot, cheering. But Raines, very nervous, even though by his own admission he had spent the previous evening to repeat this passage, has not been able to deliver this portion provided in French.

“He wanted to come back to it later, but, overcome by emotion, he did not finally done “, said Matthew Ross, the president and founder of ExposNation. But Raines was that he had not sufficiently emphasized the contribution of Montreal to his career and his attachment to the city.

“He then commissioned his agent [Randy Grossman] contact us in order to send a message, in both languages, to the people of Montreal,” adds Ross. Tim wanted to make sure that Montreal knows how much he has enjoyed playing here and the place occupied by the city in its heart. It is very important to him. “

“Tim had no written speech, just notes, and I think that the emotion has been such that it has a little lost the thread. With what we have published, it is thought to have thanked Montreal as it had to be. “