Tokyo is accelerating the work of the future olympic Stadium 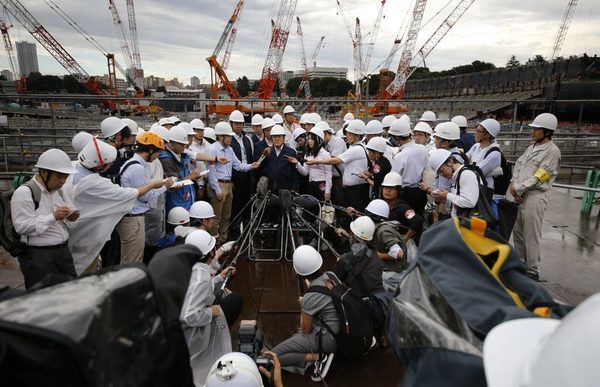 Photo: Shizuo When He Was Only Kambayashi Associated Press
The site has about 1,000 workers, on average, said Yukio Komatsu, a person responsible for the planning and the on-site management.

The olympic Stadium in Tokyo is taking shape, with 22 cranes on the site and the installation of bleachers for spectators after 10 months of work on the foundations in the ground.

With a deadline in a little over two years, the work is intense.

The minister olympic Shunichi Suzuki, in the framework of a visit of the new national stadium, has revealed that the construction takes place according to the forecasts, praising the efficiency of the conduct of the operations. He said that all of the technology available had to be mobilised to finish the stadium prior to the deadline date of November 2019. Suzuki has, however, warned that workers should not earn overtime.

“The working conditions must comply with the legal standards,” warned Suzuki.

Suzuki has made reference to the suicide this year of a worker linked to overwork, or ” karoshi “, and has addressed the concerns regarding the work environment. He recalled to the main construction company, Taisei Corp., and at the Japan Sport Council, the manager of the stadium funded by the government, to closely monitor the burnout. Measures have since been taken and the work environment has improved.

The construction took a delay of a little over a year ago on its schedule, while the original plans for the stadium have been abandoned because of spiralling costs and a design that is unpopular. The government has approved the construction of a stadium of 150 billion yen ($1.66 billion canadian) by a joint venture consisting of Taisei, Azusa Sekkei Co. and the office of Kengo Kuma, an architect who has designed the new plans.

In order to save time, Taisei and its sub-contractors provide precast elements and semi-assembled at the factory to speed up installation.

The site has about 1,000 workers, on average, said Yukio Komatsu, a person responsible for the planning and the on-site management.