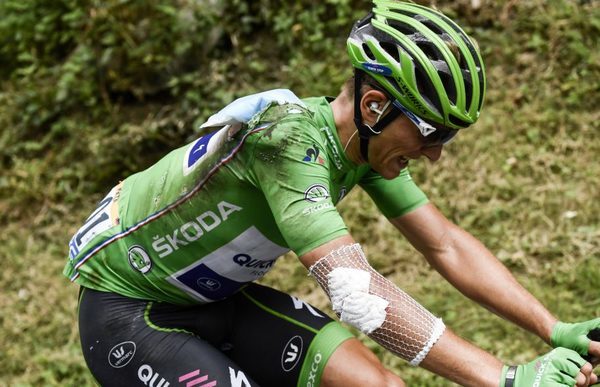 Kittel, winner of five stages since the outset, has been caught in a collective crash at the first part of the route between La Mure and Serre-Chevalier.

Serre-Chevalier — The German Marcel Kittel (Quick-Step), holder of the green jersey for the points classification, has renounced to continue the Tour de France, Wednesday, in the 17th stage, the first in the Alps.

His resignation has followed the climber’s French Thibaut Pinot (FDJ), the recent 4th of the Giro d’italia, which was feverish.

Kittel, winner of five stages since the outset, has been caught in a collective crash at the first part of the route between La Mure and Serre-Chevalier.

German, jersey torn, took over the race but ended up in this first mountain stage in the alps.

Kittel was in a position to bring for the first time the green jersey in Paris despite the threat represented by the Australian Michael Matthews, winner, Tuesday, at Romans-sur-Isère for the second time of the Tour. He had hoped to be the successor to the world champion, the Slovak Peter Sagan, the irremovable holder of the green jersey since 2012, but excluded this year after a sprint dangerous to Vittel (4th step).

The German was about to do the last step, Sunday, on the Champs-Élysées where it is already imposed in 2013 and 2014. Even the stage Friday, leading to Salon-de-Provence, which could possibly end in a sprint.

Subsequently, its substantial lead in the points classification has melted compared to Matthews who committed several times in views of the rugged golf course to score points in the intermediate sprints.

For its part, Pinot has waived prior to the summit of the Croix-de-Fer, the second of the four passes of the day.

Its abandonment has left the team FDJ reduced to three riders, four days of arrival.

The formation of Marc Madiot had started the Tour in the euphoria with the success in the 4th stage of the French champion Arnaud Démare, Vittel.

But Démare suffered in the first big mountain stage that he brought out of time (Chambéry, stage 9), just as the three teammates who had waited (Mickaël Delage, Ignatas Konovalovas, Jacopo Guarnieri).

Subsequently, Arthur Vichot, who is sick, he also gave up.

Thus, there are more than three survivors, the Italian Davide Cimolai, the French Olivier Le Gac and Rudy Molard, to defend the colors of the French team.

Since its first participation in the Tour in 2012, Pinot went through ups and downs, spectacular.

Stage winner in Porrentruy (Switzerland) for his debut, he has also entered the podium in 2014 (3rd in the general classification and also won a stage of prestige to the Alpe d’huez in 2015.