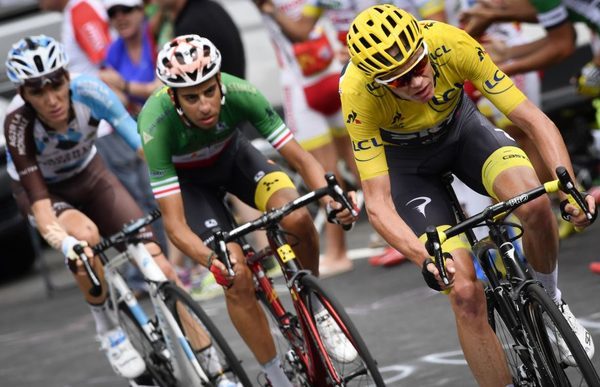 Photo: Bernard Papon, Pool Agence France-Presse
Christopher Froome (in yellow jersey), followed by Fabio Aru and Romain Bardet, in a breakaway during the 12th stage of the Tour de France on Thursday.

Romain Bardet winner, Fabio Aru in yellow, Chris Froome, a slight difficulty : the arrival of the 12th stage of the Tour de France has reshuffled the cards, Thursday, at the airfield of Peyragudes.

Where the attack of Froome, winner outgoing and wore the yellow jersey in the beginning of the stage, was expected, his opponents were ahead all the way up the very steep track of 400 meters. The big favourite this year has stalled in the last 300 metres and lost about twenty seconds on its direct rivals. Enough to lose his yellow jersey for the benefit of the champion of Italy.

In this arrival new and spectacular, Bardet proved to be the stronger. The French AG2R La Mondiale team won a brilliant victory, his third in the Tour, after Saint-Jean-de-Maurienne in 2014, and Saint-Gervais Mont-Blanc in 2016

In the general ranking of this Tour, completely revived, Aru above now Froome of 6 seconds and Bardet 25 seconds. But the Colombian Rigoberto Uran, fourth, which is only 55 seconds, although it has received a 20 second penalty for supply prohibited.

In contrast, Nairo Quintana, in trouble as soon as the first slopes of the Peyresourde, was let go. “The forces have not been at the rendezvous. I have spent lots in the Giro “, said the Colombian (2nd in the Tour in 2013 and 2015, 3rd in 2016), is now distanced by more than four minutes in the overall standings.

The Spanish Alberto Contador, another of the regulars on the podium (winner in 2007 and 2009), is even further away. The ” Gunslinger “, failed at the end of stage, dropped nearly two minutes in the ramp final 2.4 kilometres.

But the sensation came back unexpected to Froome who has entered into this first day pyrenean completely controlled by his Sky team. For the woe, by the way, the British Stephen Cummings, escaped from a distance, but picked up in the penultimate climb (Peyresourde).

Froome still had two team-mates, the Spaniards Mikel Nieve and Mikel Landa, in the group of ten runners who arrived at the foot of Peyragudes. Along this climb, Landa has dictated the pace… and ended up in front of his leader. As a effect-a mirror of what Froome had done in 2012, its leader, Bradley Wiggins, at the previous arrival of the Tour in the resort of Hautes-Pyrénées.

“I saw that Froome was a lot in the end, I doubted that it was not the best,” said Bardet about the British.

In fact, the winner, the outgoing had to leave from its direct rivals at the top of the track of Peyragudes. It is ranked 7th in the stage, 22 seconds of the French, the runner-up in the past year on the podium of the Champs-Élysées.

“The finish was very hard. I did my best but I didn’t have the legs, ” responded the British. “Congratulations to Romain Bardet, it is a very beautiful victory. “

Froome has not dropped the flag (” there are still a lot of steps, ” he recalled) to the extent that the yellow jersey might be for the Aru a poisoned gift.

The champion of Italy, which takes for the first time the controls in the Tower, has a team weakened by a fall that occurred Wednesday on the road to Pau.

Italian Dario Cataldo is dropped and the Danish Jakob Fuglsang, was wounded in one wrist (two micro-fractures), has let go on the slopes of the port de Balès, the fourth of six climbs of the day, while the winner of the Critérium du Dauphiné was the 5th place at the start of the 214,5 km.

“It really is one of the most beautiful things that can happen in life than wearing the yellow jersey “, preferred to look on the bright side Aru. “We will do everything we can to keep it. It is sure that this will not be easy. “

Friday, the 13th step compact difficulties by 101 kilometres between Saint-Girons and Foix. Three passes of 1st category (Rub, Agnes, Péguère) are on the route before the 27 last kilometres, often downhill.

“Attention to Sky, these are people who don’t like to lose and they will have at heart to reverse the trend,” said Bardet.