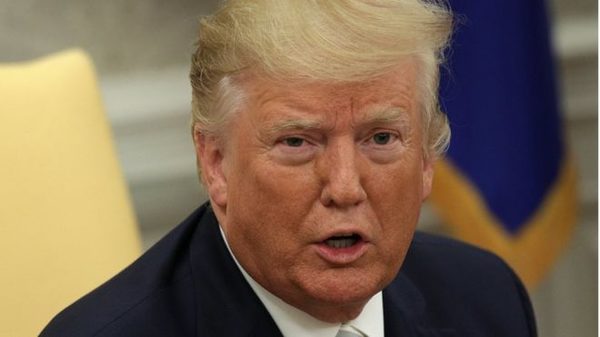 US President Donald Trump has said Jewish Americans who vote for the Democratic Party show “either a total lack of knowledge or great disloyalty”.

The remark drew sharp criticism that Mr Trump had used an anti-Semitic trope that accuses Jews of ‘dual loyalty’.

The Jewish Democratic Council of America said the president was trying to “weaponise and politicise anti-Semitism” for political gain.

Under pressure from Mr Trump, Israel last week blocked Ms Omar and Ms Tlaib from entering the country. The two women, who are prominent critics of the Israeli government, had been due to visit the occupied West Bank and East Jerusalem.

Israel later agreed to let Ms Tlaib make a “humanitarian” visit to her grandmother in the occupied West Bank, but she declined, saying she could not comply with the “oppressive conditions” being imposed.

Speaking to reporters on Tuesday, Mr Trump said: “I think any Jewish people that vote for a Democrat, I think it shows either a total lack of knowledge or great disloyalty.”

The remark was denounced by a number of Jewish American groups, which said it called on an established anti-semitic trope that accuses Jews of being more devoted to Israel than to their own countries.

“If this is about Israel, then Trump is repeating a dual loyalty claim, which is a form of anti-Semitism. If this is about Jews being ‘loyal’ to him, then Trump needs a reality check”, Halie Soifer, executive director of the Jewish Democratic Council of America, wrote on Twitter.

Jonathan Greenblatt, the head of the Anti-Defamation League, said “charges of disloyalty have long been used to attack Jews”, while the American Jewish Committee described the remark as “inappropriate, unwelcome and downright dangerous”.

Independent Senator Bernie Sanders said he was “a proud Jewish person…[with] no concerns about voting Democrat.”

Recent polls show that a majority of Jewish Americans identify as Democrats.