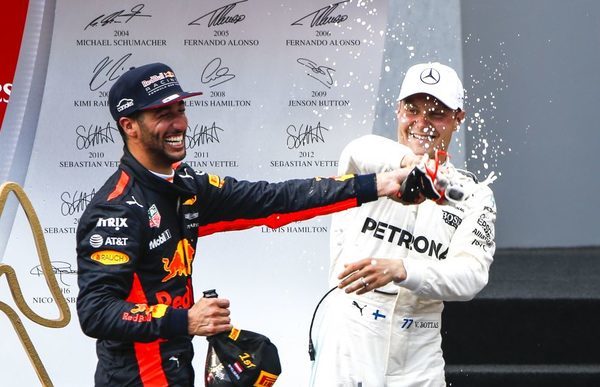 Photograph: Erwin Scheriau / APA / Agence France-Presse
The Finnish driver of Mercedes, Valtteri Bottas (right), and the australian driver for Red Bull, Daniel Ricciardo celebrate on the podium after the Grand Prix of Austria of F1.

The pilot Mercedes of Valtteri Bottas was able to enjoy his first place on the starting grid, and he has won the Formula 1 Grand Prix of Austria Sunday.

It was the second victory of Bottas this season, after the one gained in Russia on 30 April. The Finnish seems to be pleasing in Austria, where he had earned his first career podium when he was driving for Williams in 2014.

Under this result, Bottas has only 15 points behind his team-mate Lewis Hamilton in the drivers ‘ championship, and he might be back in the title race.

“I believe and the team believes in it, has mentioned Bottas. We are not yet at mid-season. “

The Ferrari driver Sebastian Vettel took the second rank and the pilot Red Bull Daniel Ricciardo completed the podium. Bottas has done just enough to prevent Vettel to catch up, and the German crossed the finish line with a delay of only 0.6 second.

“It makes sense. I was annoyed by a major flat on my left rear tire, said Bottas. I was losing more and more stability at the back. I was happy that the race ends the round. “

Vettel seemed very frustrated to have failed in his attempt to sign a 46th career win.

“I was told that he was in trouble, so I pushed. The car was dynamic and I had a very good pace, Vettel said. I would have needed an extra turn, because he was really in trouble at the top of the hill. “

Vettel has never done better than a fourth place in Austria, and he was forced to abandon the race on two occasions.

“I really wanted to win, so I’m not totally satisfied,” he admitted.

For his part, Ricciardo has shown his composure in his fight for third place with Hamilton, who attempted to overtake the Australian to a few times over the last two rounds. In vain.

“I have complied with the braking areas and I was pushed to the limit. The penultimate round was the tightest, referred to Ricciardo. He approached, but I was able to push back and I was relieved when I saw the chequered flag. “

This result has allowed Vettel to increase the gap to 20 points in the drivers ‘ championship ahead of Hamilton, who finished fourth.

Hamilton had started from the eighth position on the grid on Sunday.

The British had signed the third time in qualifying behind Vettel and Bottas, but he has been punished with a penalty of five places for replacing non-allowed his gear box two weeks ago after the Grand Prix of Azerbaijan, which had been won by Ricciardo. The latter, which occupies the fourth rank in the standings, has signed a fifth podium in a row.

The Quebec Lance Stroll has made a nice comeback in the standings, having started from 18th place and completed the top-10, just behind his team-mate at Williams Felipe Massa.

At the start, Fernando Alonso was forced to retire after contact with the Toro Rosso of Daniil Kvyat.

Red Bull Max Verstappen has had a slow start due to a gearbox problem, and as a result he found himself in the back of the pack. Verstappen has been hit by the McLaren of Alonso, and for the fifth time in seven races the Dutch could not get to the finish line.

Bottas has been a departure without stain, in contrast to Vettel. Vettel complained about the departure of the Mercedes on the radio waves, saying that Bottas was gone before the lights go off, but the Finn has been cleared by the marshals.

This was a departure chaotic in the middle of the pack, as Alonso lost control of his car and forced the other drivers to avoid it. The commissioners have determined that Kvyat had caused the accident, and as a result he has been sentenced to a penalty to the wells.

Alonso has only completed two races this season. It can, however, take comfort, because this time its Honda engine has not been responsible for its abandonment.

The Danish Kevin Magnussen (Haas) and Spanish Carlos Sainz son (Toro Rosso) have also had to give up.

The drivers will take over the Silverstone circuit next weekend, in the framework of the Formula 1 Grand Prix of England.