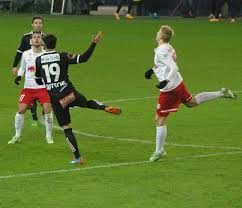 July 22 at 19:30 in Wolfsberg at the stadium “Lavanttal” Wolfsberger will take Salzburg in the starting round of the championship of Austria 2017/18.

Wolfsberg vs Red Bull preview
Wolfsberger finished in 8th place in the last Austrian championship, in 36 rounds, gaining 42 points with 40 goals scored and 59 goals conceded. In the summer, “wolves” actively played friendly matches, although their rivals were not top level. In six offseason bouts, Wolfsberger won three wins, once tied and lost twice. The official season of “wolves” began with a victory in the Austrian Cup, over Mannsdorf 2: 1.

Wolfsberg vs Red Bull prediction
Salzburg in the last 10 years unconditionally the strongest team in Austria. Last season Red Bull won both the championship and the national cup and already plays in the Champions League. After 5 control meetings of the summer, the “bulls” have already played one match in European competition, easily defeating Hibernians on the road 3: 0. Plus in the cup Salzburg started with a 7-0 win over Deutschlandersberger.

Wolfsberger can not beat the “bulls” in 9 official meetings in a row, since March 21, 2015. I think that in the next confrontation of the “wolves” and “bulls” the champion of Austria will be stronger. Guests in composition exceed the opponent, plus they have already had two games this season, and at the start of the championship, it also matters. Bet: victory of Salzburg – P2.