A “Great return” in Germany 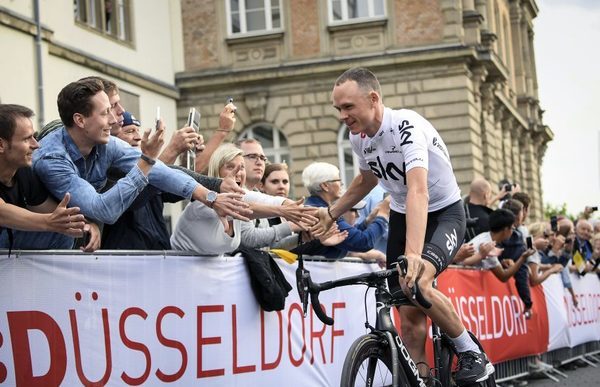 Photo: Lionel Bonaventure Agence France-Presse
The great star Chris Froome has tightened the hands of German amateurs on Friday during the official presentation of the teams.

The kick-off of the Tour de France is called the ” Great departure. “This year, it takes the form of a” Great return “.

Six years after the decision of the German tv to stop broadcasting the flagship event of the cycling because of a series of doping scandals and three decades after his last presence in the country, the Tour takes off this weekend with two stages in Düsseldorf.

The race starts Saturday with a race against the individual time trial of 14 kilometers (8,7 miles) raced mainly on the flat in Düsseldorf, and which seems tailor-made to allow the quadruple world champion, Tony Martin, took over the yellow jersey to his supporters.

The second stage, Sunday, will be held between Dusseldorf and Liege, Belgium.

It was in 1987 that the trial of three weeks, took his departure for the last time in Germany, when the Grand départ was given to West Berlin — at a time when the city was still divided into two.

A decade later, the German cycling has had its hour of glory when Jan Ullrich became the first German rider and then only to win the Tour.

Ullrich has also finished five times second in the Tour three times behind Lance Armstrong, who has finally been stripped of his seven titles for doping.

Ullrich is also fell in disgrace and was suspended in 2006 in the wake of the operation Puerto, the scandal of blood doping in Spain. He retired a year later, and the Court of arbitration for sport has subsequently banned for two years in 2012 for having participated in the program of doping by the Spanish physician Eufemiano Fuentes.

Ullrich has not challenged the decision of the sports court and he remains persona non grata in the circles of cycling. He has not been invited to Düsseldorf by the organisers of the Tour.

While the victory of Ullrich in the Tour has launched a veritable golden age of German cycling, the sport is rapidly disintegrated in the country in the wake of doping scandals involving major riders like Patrik Sinkewitz and Stefan Schumacher. Even Erik Zabel, the popular rider who still retains the record of six green jerseys for the points classification of the Tour, has admitted to have doped after his retirement.

Nowadays, a new generation of riders germans, led by Martin, the sprinters André Greipel and Marcel Kittel — who won, respectively, eleven and nine stages of the Tour — and the specialist in classic John Degenkolb has brought back the local amateur cycling.

The station broadcast on German television ARD started to broadcast the Tour in 2015, and the Tour of Germany is expected to return next year, after having been withdrawn in 2009.

“A lot of people are anxiously waiting for the return of the Tour de France in Germany, and we want to give fans reasons to be proud of us,” said Kittel, who aims to win the second stage. Having the Grand depart here is an important step for the German community. “

Martin, meanwhile, should flourish on the urban route that follows the banks of the Rhine. The route is probably not long enough for Chris Froome and Richie Porte, the favorites of the Tour, dig the gap with their rivals, even if they can claim the stage victory.

Another rider to watch in this against-the-watch is Rohan Dennis, the Australian’s BMC team, which has won the first stage in 2015.