Despite the war, the syrian team basketball dream at the top of the basket 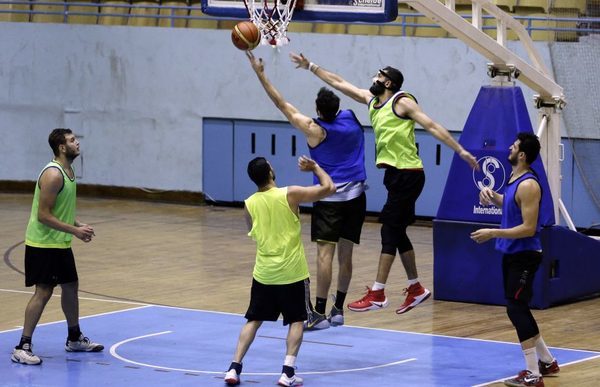 Photo: Hired Beshara Agence France-Presse
From time to time, the noise of air strikes syrian or of the shells fired by the rebels on neighborhoods in the vicinity come to disturb the training.

In a gym rundown of Damascus where the team train in the national syrian basketball, Khalil Khoury passes through the field by dribbling and passing the ball between his legs before going to make a basket be all that smooth.

Since the start of the syrian conflict in 2011, the national team has seen its membership plummeting, as are the number of rooms in which to train. But players and coaches cling to continue to exist on the international scene.

From 8 to 20 August, it will compete with fifteen other nations in the Asian Championship, organised in neighbouring Lebanon.

The average age relatively high of the team is one of the reflections the major difficulties facing it.

“I’m the youngest,” said the AFP Khalil Khoury, 19 years. “My team-mate Michael Madanly was about 20 years older than me,” he adds, in the margin of a training session at the sports center in Al-Fayhaa.

“Some players have emigrated, others have been enlisted in the army, so it is normal that those who remain in play until a ripe old age,” stresses the back-winger, recognizing, however, that this situation affects the performance of the team.

The secretary-general of the Federation of syrian basketball, Daniel Zoalkefl, indicates that the clubs participating in the national championship have lost ” more than 120 players who took the road of exile.

Twelve players are present on that day in the room decorated with posters advertising pre-war and photographs of former players, now abroad.

From time to time, the noise of air strikes syrian or of the shells fired by the rebels on neighborhoods in the vicinity come to disturb the training.

“A mortar exploded at the place where I find myself, another there, and dozens of other around the room. This is not easy, but we have become accustomed. This is the war “, said Mr Zoalkefl.

Because of the frequent power outages in the syrian capital, the leader must continually ensure that electricity generators that feed into the sports centre for Al-Fayhaa is one of the most famous of Damascus — not lack of fuel.

The workouts are also made difficult by the scorching heat of the summer. And as the air conditioners are down for months, the players are usually in the evening.

After the outbreak of the war in 2011, “the national championship was interrupted for a year and then each province has played, separately,” until 2015, when the national competition has resumed its rights, remembers Anthony Bakar, 24 years old.

The ten foreign players who then played in Syria have left the country.

Their departure has had a negative impact on the level of the championship. It is not easy to convince a foreign player to stay and play in a country at war, ” said Bakar, a winger fort of 1.99 m.

Coaches also have fled. And ” for those who remained, it is difficult to find training grounds because of the security situation. The choices are very limited, ” said Hadi Darwish, coach selection, and a club in syria.

“There is a form of seat which is exercised upon us, many countries do not want to accommodate us. Obtaining a visa is difficult and takes a lot of time “, said Mr. Darwish.

“The challenge is to build something, to build a national team able to compete and represent the country in the best way,” says the Serbian Nenad Krdzic, the other coach of the selection in syria.

A few minutes before the end of the training, the room finds himself suddenly plunged in the dark. The generator backup, broken, is of no value, and the session must therefore come to an end.

Majd Arbacha gets on her knees, trying to catch his breath.

The rear recalls the beautiful days before the war.

“My teammates fail me. The audience, the stands full, I miss them. Before, basketball was a source of joy. Today, it has become a heart-breaking “.