Donald Trump, a federator and messianic, passes his congressional examination 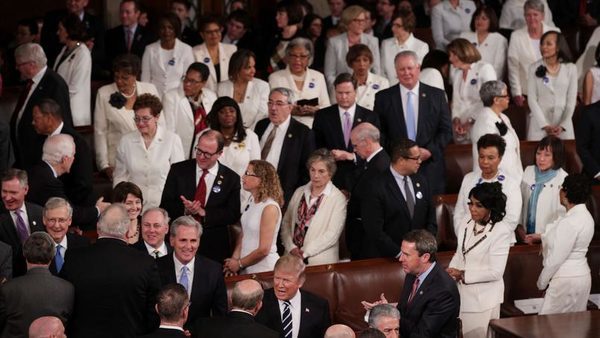 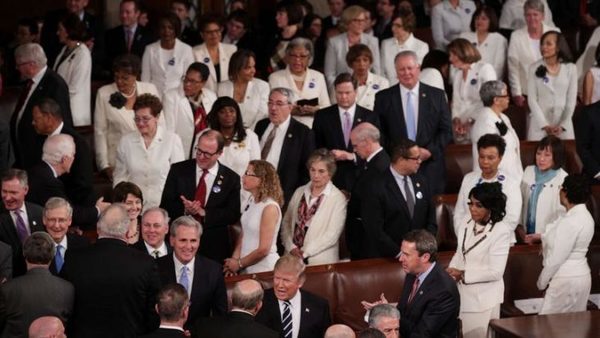 On a more presidential register than usual, the new tenant of the White House called for the “renewal of the American spirit”, without giving much details on the financing of its flagship projects.
From the shadow to the light. Thirty-nine days separated President Donald Trump’s inaugural speech and Tuesday’s speech to the joint session of the Congress. As distinct as the day is from the night, in the almost literal sense. On 20 January, under a disagreeable drizzle, the New York billionaire had evoked in a crepuscular way an “American carnage” after the Obama era. This time, in the face of the 535 elected members on Capitol Hill, his government, the General Staff, the Supreme Court amputated three of its insubordinate members, Donald Trump delivered a speech entitled ” Hope and Of dreams “, praying his compatriots” to believe in themselves , believe in the future, once again, in America . ”
For an hour, he called for the ” revival of the American spirit “, optimistic and conquering. The one that will allow to “repel hatred and evil” omnipresent in a society corroded by racism, xenophobia and anti-Semitism, evoked in the very first minutes of the speech. He who, bold and magnanimous, will be able to imagine “a real and positive reform of immigration” and a program of “national reconstruction” of infrastructures, unprecedented since Eisenhower and its motorways, creator – it is promised – Of jobs “.
The whole room rose when Donald Trump evoked the memory of Private Ryans Owens, killed in an operation in Yemen at the end of January. The eyes turned to his wife Carryn, here on the left, with Ivanka, the president’s daughter.
Fired by Steve Bannon and Stephen Miller, the gray eminences of the West Wing (West Wing of the White House where the President’s offices are located), do these two antipodal speeches translate the ideological errors of a novice president into politics , Surrounded by advisors who are just as “blue” in their field, or do they participate in a scenario woven beforehand? A first act to describe the extent of the disaster that would inherit a head of state animated by the sacred fire, but shaken by the field of ruins received as an inheritance, then a second act, founder that one, to seal a pact of confidence With the American people.
The string, a great classic of political communication, is well known. Still, the unpredictable Donald Trump agreed to play the game, and delivered an actor performance in the temple of this vilified “establishment” at meetings in 2016.
Rejection of the Obamacare, erection of the wall, tax cuts

Pari held: respecting the passages obliged – the rejection of the Obamacare, the erection of a “great wall” on the Mexican border, “massive tax cuts”, the “rebuilding” of the army, Eradication of the “vile enemy” jihadist, who will be denied a “bridgehead” in America – he proclaims his loyalty to free trade but affirms that the slogan will henceforth be to “buy American, hire American” .

The new tenant likes to blow hot and cold, playing his unpredictability to unseat his rivals. In terms of international alliances, America’s allies can “sleep on their ears” because America “strong, free and proud” is ready to “lead “. But provided they “fulfill their financial obligations”.
As a sign of silent protest, some forty democratic elected representatives were dressed in white, a color symbolizing the defense of women’s rights.
In a memorable segment, the president invited his compatriots to ” imagine the wonders we could achieve if we let the dreams of the (American) people freely, “. A semantic trick of a talented comedian, in the eyes of the Democratic opposition in order of battle, the presidential speech in Congress should delight Trump America, this coalition of “forgotten people” Conservatives and libertarians, all of whom fiercely believe in radiant tomorrows thanks to this strange character who has vowed to “render his greatness” to the country.
The path is traced, the presidential impulse given. It remains for this Congress so unenthusiastic to dig out the outlines of an ambitious plan of action and to solve in budgetary terms the following riddle: how the devil to finance the pharaonic projects of a president in mouth, and so stingy details?