Donald Trump becomes the 45th President of the United States 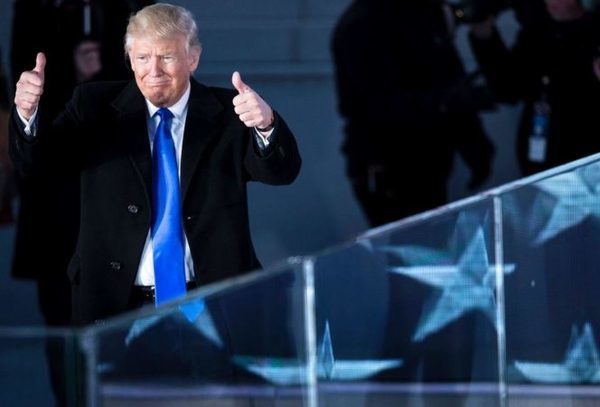 Donald J. Trump is sworn in Friday on the steps of the Capitol, in the heart of Washington, to succeed Barack Obama and become the 45th president of the United States, incredible epilogue of an anti-elite campaign that took everyone to reverse .
At 70, without any political, diplomatic or military experience, the real estate tycoon is preparing to take the reins of the world’s first power under the watchful eye of the allies of the United States, shaken by his thundering declarations, sometimes Contradictory.
After a night at Blair House, a guest house located opposite the White House, Donald Trump and his wife Melania were to share a tea with Barack and Michelle Obama before going to the Capitol together.
Hundreds of thousands of Americans, enthusiastic and fierce opponents, are expected on the wide lawns of the National Mall facing him. Three of his predecessors – Jimmy Carter, George W. Bush, Bill Clinton – will be present, along with Hillary Clinton, his unfortunate opponent.
“I solemnly swear to fulfill the functions of President of the United States faithfully and to the fullest extent of my ability to safeguard, protect and defend the Constitution of the United States”: shortly before noon, the businessman As George Washington, Franklin D. Roosevelt and John F. Kennedy did before him.

He chose two bibles: his own, which was offered to him by his mother in 1955, and that of Abraham Lincoln, the savior of the Union, also used by Barack Obama four years ago.
After the campaign (17 months) and the transition (two and a half months), this is the moment of the exercise of power (four years) for this former animator of a reality show that promised to ” Make its greatness to America “but faced a fractured country, so much its style and words, willingly provocative, divide.
“We will bring our country together,” he promised Thursday.
Level of unpopularity record
In a day filled with rituals that America is fond of, the 45th president of American history will then give a speech of inauguration less in the form of program than vision, ensures his entourage.
The ceremony, which will be followed live throughout the world, will have a taste of revenge for the businessman with the astonishing hairstyle whose announcement of candidature had been greeted by snickers, both Republicans and Democrats.
His team announces for the beginning of next week a series of decrees aiming to undo a part of the balance of his predecessor democrat (climate, immigration …) and to sketch his own. He could sign a few on Friday.
It is a difficult task for the author of the bestseller The Art of the Deal, who promised to be “the greatest creator of jobs, with a sense of the formula that enchants his supporters and his detractors.” God ever created “.
The constitution of his teams was difficult as the victory took the Republican camp by surprise. From the day-to-day operation of the White House, enormous administration, to interactions with other agencies, the first few weeks could be chaotic.
And never for 40 years an American president had taken power with such a high level of unpopularity.
According to a study by the Pew Research Center on Thursday, 86% of Americans believe that the country is more politically divided than in the past (this figure was 46% when Barack Obama came to power in 2009).
Obama flies to California
Those who hoped that the function changes man were disappointed.
Thanks to Twitter, the 70-year-old continues to settle daily accounts with those who have criticized him, John Lewis, figure of the civil rights movement, to actress Meryl Streep, accused of being Hillary’s minion Clinton.
“He seems to want to fight all the windmills of the earth rather than concentrate on donning the most important post in the world,” summed up a formula murdered Republican Senator John McCain, One of the few dissenting voices in the Grand Old Party.
As a result, the Democratic opposition stole its weapons, and dozens of elected officials boycotted the ceremony. Several events are also planned Friday and Saturday.
On the international stage, the booming real estate developer has already shot his arrows against China, NATO or the German Chancellor Angela Merkel.
It is on this front that his future mandate arouses the greatest questions. The leaders of the planet are wondering about the exact value to be given to his statements when the officials he appointed – at the head of the State Department or the Pentagon – take apparently opposite positions, such as Russia’s Vladimir Putin or the Iranian nuclear agreement.
Just after the ceremony, Barack Obama, 55, will fly directly to California for his first family vacations as a former president.
After eight years in power, the Democratic president who overcame an economic and financial crisis that threatened to take everything in his path indicated that he intended to stay away from the fray to let his successor govern.
But he also promised, at his final press conference Wednesday, to get out of the woods if America’s fundamental values, from immigration to freedom of expression, were threatened.

“GIVE A CHANCE” TO MY FATHER, ASKS IVANKA TRUMP
Donald Trump’s daughter, Ivanka, called her father’s detractors to “give her a chance”, while acknowledging that she sometimes advised her to stop tweeting.
Interviewed on an ABC program broadcast a few hours before her father’s inauguration in Washington, Donald Trump’s 35-year-old favorite daughter admitted that “the country is very divided.”
But “I have seen all my life that my father was an incredible unifier. So, to each of his detractors, I would say, give him time, let him take office, let him prove that you are wrong, “she pleaded, promising that M’s investiture speech Trump would be a speech “of unity and optimism”
Faced with women worried about the coming to power of the billionaire, many of whom plan to demonstrate Saturday, she also assured that he had shown all his life his support and his defense of women.
As to whether she sometimes told her father, often criticized for her countless tweets on all subjects, to stop tweeting, she replied: “Of course sometimes I tell her not to do it.” But she also pointed out that Tweeter was a very powerful tool that allowed her to carry her message directly.
The ex-model became a businesswoman also deemed inappropriate the title of true First Lady given to her by some American media, as she is more visible alongside her father than Melania, the third wife of the billionaire.
“There’s a first lady, and Melania will be an incredible First Lady, I’m proud of her,” Ivanka said.
While her husband Jared Kushner “a remarkable human being,” she said – was appointed high councilor in the White House, this mother of three young children did not rule out weighing too on some files.
“My priority is to move to Washington, to travel across the country, to listen and see how I can have positive added value,” she said.
Ivanka also assured that despite all the acrimony of the presidential campaign and the harsh defeat of Hillary Clinton, she would remain friends with her daughter Chelsea, who is almost the same age as her (36 years old).
“I have not talked to her yet about the challenges of this new stage, but I do intend it,” she said.