Donald Trump evacuated open meeting: “People looked at me like a demon” 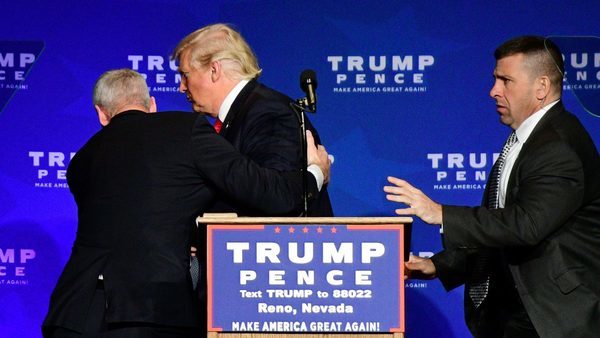 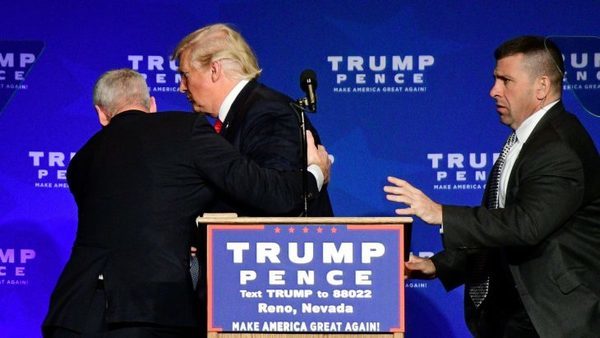 The Republican candidate for the White House was evacuated promptly scene Saturday night at a rally in Nevada, after a false alarm indicating the presence of an armed man in the audience. In reality, it was armed only with a sign with an anti-Trump message.

More fear than harm. Saturday night at a rally in Reno, Nevada, Donald Trump had to be briefly evacuated from the scene by Secret Service. The latter, in charge of security of the Republican candidate for the US presidential election , said a man shouted “weapon” in the middle of a crowd movement and was immediately arrested.

Confusion and panic
But after a thorough search of the individual and the nearby area, “no weapons were found,” said the Secret Service, noting that an investigation was underway to establish the exact circumstances of the incident. In the images of the sequence, we see Trump Donad watch the crowd of activists in a moment of hesitation, then quickly led backstage.

Sheltered by two security guards after a panic in the audience, he returned to the cheers of the crowd. “Nobody said it would be easy for us, but nothing will stop us,” said the man of populist business 70 years after his return on stage.

“I want to thank the Secret Service. These guys are fantastic,” he added. American television showed images of a man wrestled to the ground and searched before being taken away by security officials.

In fact, the man, who was released soon was armed only with a sign proclaiming “The Republicans against Trump.” He told the Guardian that the incident had occurred while he was heading to the scene to wave his panel.

He said he had been torn down by supporters of Donald Trump who surrounded him and started beating him, give him kicking, choking him and “grab the testicles” before someone cries “something about a gun” and that the security services are involved. “When I was out of the room, people looked at me like a demon,” he added.

He said he had decided to protest against the Republican candidate for the White House because of his positions on the Mexicans, Muslims and women.

In a statement issued shortly after the incident, the real estate mogul thanked the Secret Service, the forces of Reno and the State of Nevada for “their quick and professional response.”