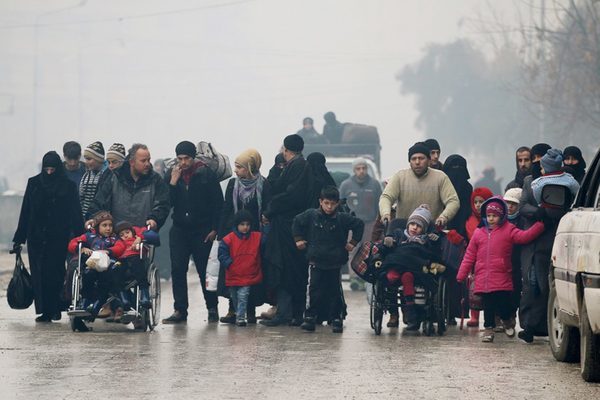 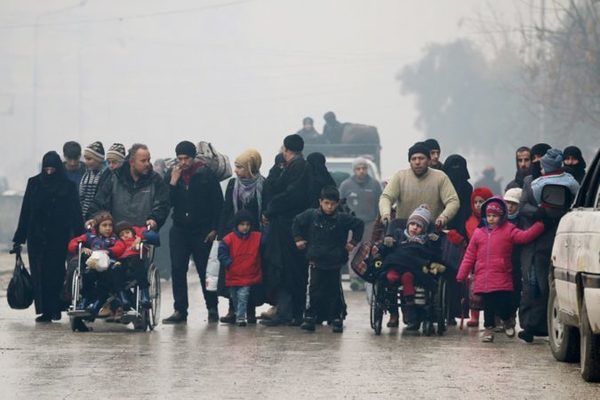 Russian UN Ambassador Vitaly Churkin said on Tuesday that the fighting had stopped in Aleppo East after the start of an evacuation of rebel fighters.

Rebel fighters “have started from and after that the military operations have stopped,” he told reporters. “The fighting around Aleppo East are over. ”

An agreement on evacuation of civilians and insurgents in Aleppo was concluded Tuesday announced rebel groups after a wave of international outrage against the atrocities committed in the second city of Syria poised to fall into the hands of the regime.

The humanitarian challenge is huge since tens of thousands of people remain under siege in the last rebel districts submitted to the shelling of the army, which is about to win his greatest victory since the conflict began in 2011.

In recent times, the United Nations is alarmed by the alleged execution of dozens of civilians and NGOs have launched a cry of alarm about the human tragedy in “hell” of Aleppo, the Syrian northern city ravaged the fights.

An agreement was reached with the Syrian government to evacuate rebel fighters in Aleppo, said for his part the Russian Ambassador to the UN Vitaly Churkin.

“The latest information I have, an agreement was reached on the ground providing that the fighters will leave the city,” he said, adding that the evacuation could take place “in the coming hours.”

He was speaking while had opened an emergency Security Council meeting on the situation in Aleppo East, requested by France and the United Kingdom.

Rebel groups had previously reported an agreement for the disposal of rebels and civilians in Aleppo.

The agreement to evacuate “the inhabitants and rebels with their small arms besieged neighborhoods” was concluded “under the leadership of Russia and Turkey,” the respective supporters of the regime of Bashar al-Assad and rebellion, told AFP a rebel official.

He “will come into force in the coming hours,” said Yasser al-Youssef, a senior political bureau of the influential group Noureddine al-Zangi. “In a first step, the wounded and civilians will be evacuated. Then the rebels come out with their light weapons. ”

“Those who choose to leave or go to the west of the province of Aleppo province or to the (neighboring) Idleb (northwest),” in areas under rebel control, he said.

A source at Ahrar al-Sham, another influential Islamist rebel group, confirmed an evacuation agreement stating that civilians and rebels would be transported on buses to these areas.

Submitted for four weeks to violent aerial bombardment and artillery, the rebels have lost almost all their former stronghold of Aleppo and East are confined especially in the great neighborhood of al-Mashhad.

Meeting at the UN

Unable to stop the war machine of the Assad regime that has regained almost all of Aleppo in favor of a devastating offensive launched on November 15, the international community tried in an emergency to stop the drama humanitarian in neighborhoods still in rebel hands.

US Ambassador to the UN Samantha Power asked Tuesday that “impartial international observers” are deployed to Aleppo to oversee the evacuation “safe” civilians.

Speaking before the Security Council held an emergency meeting, she stressed that civilians who want to leave Aleppo East “fear, rightly, to be shot in the street or taken away to a gulag of Assad “.

The plight of civilians was again debated at the UN Security Council from 17 pm GMT (noon in New York), following a request of France, that the situation in Aleppo is “the worst humanitarian tragedy in 21st century. ”

The spokesman of the Office of the United Nations for Human Rights, Rupert Colville, was earlier reported “information indicating that pro-government forces killed at least 82 civilians, including 11 women and 13 children” in neighborhoods of the northern city.

“The pro-government forces entered houses and killed civilians who were there, including women and children,” he said.

The head of the working group on humanitarian assistance in Syria, Jan Egeland, also condemned “the atrocities committed by the victorious militias in Aleppo.”

Echoing these concerns, the French Prime Minister Bernard Cazeneuve denounced the “countless atrocities” committed by the regime against civilians who may be in his “war crimes or crimes against humanity.”

Britain has requested the departure of Bashar al-Assad, which was shown in her by a “barbaric cruelty” toward his people.

“Our fate is sealed (…) We will die or we will be arrested,” said AFP Ibrahim Abu al-Leith, spokesman for the White Helmets, the organization of emergency workers in the rebel area.

The Syrian army helped ground the Iranian fighters and Lebanese Hezbollah control over 90% of Aleppo and East were conducting search operations Tuesday, according to the Syrian Observatory for Human Rights (OSDH).

State television broadcast images filmed in neighborhoods resumed the rebels: the ruins and rubble of sight.

Leaving this area, hundreds of men and women formed an endless queue and advancing with small steps in the cold and mud, some wrapped in blankets or coats, carrying their children and their meager possessions in plastic bags .

“Aleppo is in an absolute emergency: 100 000 people are still trapped in an area of ​​5 km square,” said AFP President of Doctors of the World, Dr. Françoise Sivignon, calling save civilians this “hell”.

Doctors declaration with Presidents … by elysee

The NGO Save the Children expressed concern about the fate of “hundreds of children (who would be) in the middle of this field of wars with their parents or orphaned by the bombing.”

A total recovery of Aleppo will allow the system to control the five largest cities, with Homs, Hama, Damascus and Latakia. A change that would not have been possible without the crucial support from Moscow, staunch ally of the regime.

In four weeks, the offensive has killed more than 463 civilians in Aleppo East according to OSDH, while 130 civilians were killed by rebel gunfire in the west of Aleppo. More than 130,000 civilians have fled the eastern neighborhoods.

The conflict in Syria has since March 2011 more than 310,000 dead and thrown out of their homes for more than half of the population.