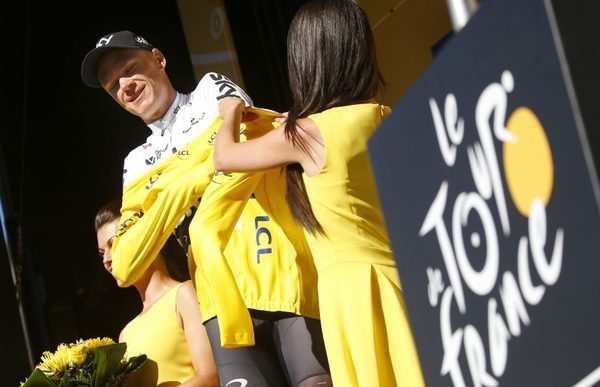 Photo: Peter Dejong, Associated Press
Froome took advantage of the delay of the champion of Italy’s Fabio Aru, poorly placed at the foot of the ramp to the final, to take back control of the Tower.

Rodez — Briton Chris Froome took over the yellow jersey of the Tour de France, Saturday, at the end of the 14th stage won by Australian Michael Matthews (Sunweb) in the top of the côte de Rodez.

Froome took advantage of the delay of the champion of Italy’s Fabio Aru, poorly placed at the foot of the ramp to the final, to take back control of the Tour after a break of two days.

Aru, very forlorn after the misfortunes which have overwhelmed his or her team Astana (dropouts Cataldo and Fuglsang), dropped 25 seconds in the uphill finish, a coastline of 570 metres at 9.6 %. On the contrary, Froome, very well surrounded by his Sky team.

“My teammates have been very careful in the last ten kilometers, never in the lead but always in front,” explained Froome, seventh on the line.

The winner out of the Tour particularly thanked the Polish Michal Kwiatkowski, world champion 2014, which plays a fundamental role with him since the start of Düsseldorf.

“Twenty-five seconds [the delay of Aru on him], it’s huge ! , “said the favorite for the Tour, adding that in this Round,” there are small differences, and each second counts “.

In the provisional general classification, Froome above now Aru 19 seconds.

Of the contenders for the podium, the Irishman Dan Martin, and the Colombian rider Rigoberto Uran finished in the wake of Froome. The French Romain Bardet, 11th step, gave in 4 seconds but has kept its third place in the standings, 23 seconds of the yellow jersey.

“I was too far behind at the beginning of the climb,” admitted Aru. “There has been a break, I had to make a big effort to come back and I paid for it then when there was a new break. “

“Needless to say, I would have preferred to keep the jersey,” said the Sardinian. “But there will be a last week very challenging. All is not lost ! “

In this step, the transition type under the heat along the 181,5 kilometers, the breakaway was attended by five riders (Voeckler, De Gendt, Roosen, Bouet and Hollenstein) as of the first kilometers. But the peloton, controlled mainly by two teams, Sunweb, BMC), has kept the group under control, to less than three minutes.

The Belgian Thomas De Gendt, already at the front in a comparable stage in 2015, has left behind one by one his companions on the roads rising from the Aveyron to find himself alone in the lead at 32 kilometers from the finish. The winner of the stage on the Ventoux last year defended hard in his advance until the junction for 13 miles.

In the sprint race, held after a ramp of 570 metres at 9.6 %, the Belgian Philippe Gilbert has forced the pace but was overwhelmed by Van Avermaet, winner on the same site in 2015.

But, this time, the Belgian was beaten by Matthews, who won for the second time on the Tour. In the past year, the Australian won the stage from Revel to the world champion, the Slovak Peter Sagan.

The 26-year-old, “Bling-Bling” Matthews has also won two stages of the Giro d’italia and three in the Vuelta.

Matthews has brought to the team Sunweb his second success in two days, in the aftermath of the victory for Warren Barguil to Foix.

Sunday, the 15th step crosses the plateau of the Aubrac, after the departure of Laissac-Séverac the Church to join The le Puy-en-Velay.

The course 189,5 km, hilly, discovers a collar that is unprecedented, Peyra Taillade, at the approach of the last 30 kilometres.