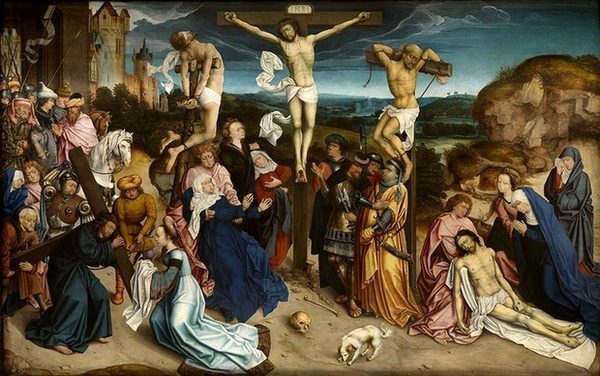 Good Friday, which falls on April 14 in 2017, is the most special day of the last week before Easter. On Friday, they crucified Jesus Christ, and in memory of his sufferings Christians observe a very strict fast on this day.

“Observer” collected the basic rules and signs of Good Friday.

“Passion of Christ”, a fresco by Hans Memling in the Cathedral of St. Salvator in Bruges

This day is dedicated to the memory of the crucifixion and death of Christ on Calvary; The removal of his body from the cross and burial. To emphasize the importance and tragedy of these events, as well as the significance of the sacrifice of Christ, the church does not conduct a liturgy on this day. But during the evening service they read the special canon “On the Crucifixion of the Lord” and take out the shroud – a large handkerchief with the image of Jesus lying in a coffin, full-length. The shroud is set in the center of the temple, on an elevation decorated with flowers and smeared with incense as a sign of sorrow for the death of Christ.

The shrouds exist in the church’s everyday life from around the 15th century. The first was the famous Turin Shroud. Some church figures consider it a genuine piece of cloth, into which the body of Christ was wrapped before burial. However, the results of radiocarbon analysis showed that the shroud was made in the XIV century, that is, when it was first shown to the public.

In Catholic Italy, Good Friday is celebrated with a procession of the cross with the participation of actors depicting the execution of Christ

A day without food

More precisely, on a starvation ration. According to the charter, believers are supposed to completely refrain from eating until the shroud is removed (that is, until 14 hours), and after that you can only eat bread, raw vegetables-fruits and drink water.

Almost nothing. You can not work, you can not do business, especially sewing and washing. Although modern clergymen do not insist on such a strict observance of the rules. Especially when you consider that washing, say, turned into a simple button press. It would be an overstatement to think that this is a grave sin, even for very religious people.

Also a sign says that you can not cut anything (bread, for example, can only be broken). By itself, you can not have fun – sing, dance, watch comedies. It’s not such a day.

It is interesting that in Canada and some US states Good Friday is an official weekend – the state recognizes that it is a sin to work on this day.

What you need to do

After matins, you are supposed to bring home the candle with which you stood during the service, and let it burn out at home. True, matins in modern practice are usually held on the eve, that is, on Thursday evening.

– If we wean the baby from the breast on Good Friday, the baby will grow strong, healthy and will live happily;

– if on this day it is cloudy, then the bread will be with weeds;

– parsley, sown on this day, gives a great harvest. True, it is unclear how to sow, if economic work is prohibited.