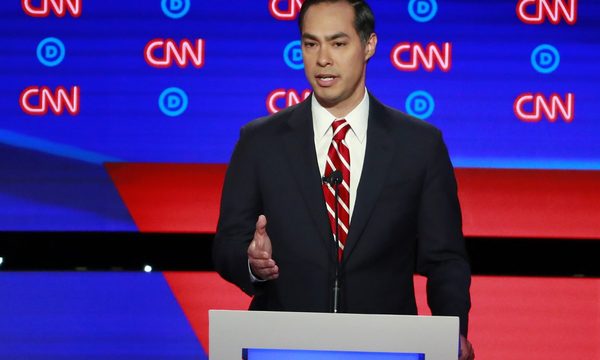 “Julián’s candidacy is a milestone for Latino representation at a time when the Latino community has been demonized and dehumanized by Pres. Trump,” says LVF’s president.

Fresh from a second round of debates, Democratic presidential candidate Julián Castro nailed a key endorsement from Latino Victory Fund, a group dedicated to building the political influence of Latinos.

While some may see the endorsement as logical, since Castro is the only Latino in the race, polls have shown Hispanic voters, like white voters, have divided their loyalties among the many Democratic candidates. Several of the candidates have hired Latinos to help them connect with Hispanic voters who will be the largest non-white group of eligible voters for the first time in the 2020 election.

In making the endorsement, Melissa Mark-Viverito, Latino Victory Fund interim president, said in a statement provided to NBC News that Castro is a dedicated, experienced leader who will restore dignity to the White House and who has an “inclusive vision for all Americans.”

The group also acknowledged the magnitude of the possibility that Castro, a former Cabinet secretary under President Barack Obama and former San Antonio mayor and councilman, could be the first Latino president and could follow a president with low approval ratings among a majority of Latinos.

“Julián’s candidacy is a milestone for Latino representation at a time when the Latino community has been demonized and dehumanized by President Trump,” Mark-Viverito said.

Castro previously told NBC News that he is the antidote to Trump.

Castro had been dismissed as a lower-tier candidate in the Democratic primary race and had a slow start in gaining financial support.

Having been off the political stage a few years, he also has had to do significant catch-up on the name recognition and fundraising fronts.

Unlike rivals who are in office and have recently run for election or re-election, he had little campaign infrastructure. His campaign is not accepting political action committee or lobbying money.

But Castro has been feisty in the months since he announced, beating other candidates to the release of policies and matching or outdoing his rivals in detail.

He ratcheted up his profile with his performance in the June debates in Miami, where he tangled with fellow Texan Beto O’Rourke over immigration.

He has also won some attention for his various policy proposals, but has still struggled in polls.

In Wednesday’s debates, Castro’s performance kept him in the race, allowing him a chance to review some policy proposals with national audiences, as well as show some fierceness by squaring off with Vice President Joe Biden on immigration and taking a dig at Senate Majority Leader Mitch McConnell, a Republican, by invoking the Twitter hashtag #MoscowMitch.

“We are beaming with pride to announce our unequivocal support for Secretary Julián Castro for president of the United States,” Mark-Viverito said. “Estamos contigo, Julián (We are with you Julián.)”