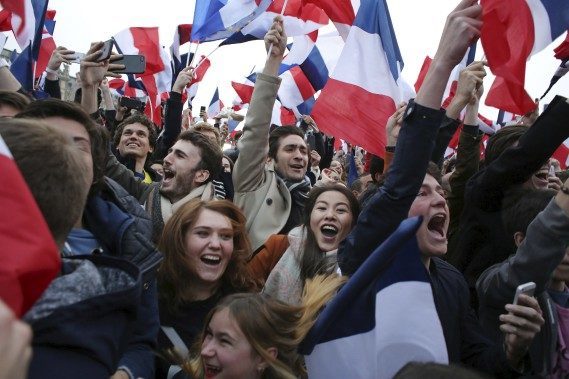 Thousands of supporters, shouts of joy and a tide of French flags welcomed Emmanuel Macron Sunday in front of the Louvre Museum in Paris. But the new president was already embarking on an “enormous task” that “will require to continue to be bold”: that of winning a majority in the June legislative elections to begin a real “change”.

The victory of Emmanuel Macron at 65.8% against 34.2% against the candidate of extreme Right Marine Le Pen made Macron 39 years old, the youngest president in the history of France.

But for the centrist who launched his movement En Marche! Barely a year ago, the enormous challenge is now to win a majority in the legislative elections on 11 and 18 June. What he clearly asked Sunday, promising not to give in “nothing to the fear” or “to the division”.

“This majority of changes is what I expect of you in six weeks,” insisted the president-elect, former Minister of the Economy and pro-European symbolically entered on stage to the sound of the European anthem. ‘ Hymn to the joy of Beethoven.

Mr. Macron, who had crossed the courtyard of the Louvre Museum a few minutes earlier, alone, with a grave face, promised that he would do everything in his power to ensure that the French “have no more reason to vote for the extremes.”

“What we have been doing for so many months has neither precedent nor equivalent, everybody told us that it was impossible,” he added.

Despite the defeat, French leader of the extreme right, Marine Le Pen, said Sunday that his party the National Front had become “the first opposition force” and that it has achieved a “historic” result. “The first round has endorsed a major breakdown of French political life by eliminating the old parties,” she said in connection with the April 23 ballot. Now, added Le Pen, the second round of Sunday “organizes a major political recomposition around the cleavage between patriots and globalists.”

Fifteen years after the failure of his father, Jean-Marie, Marine Le Pen, 48, presented throughout the campaign as the “candidate of the people” against “globalization” and elites, strong populist wave Which led the British to vote for the Brexit and the Americans to elect Donald Trump.

The Sunday presidential election was marked by a high rate of abstention and, above all, white or null votes. According to estimates, in addition to the forbearance rate of 24.5%, the number of votes canceled would approach 12%. As a result, one Frenchman in three would have refused to choose Sunday between centrist Emmanuel Macron and Marine Le Pen, a record rate since 1969.

“The presence of the extreme right in the second round did not cause over-mobilization compared to the first round, contrary to what happened in 2002,” commented the professor of political science at the University of Lorraine, Anne Jadot. “There was no shock effect because his presence was expected.”

The leader of the radical left Jean-Luc Mélenchon calls his 7 million voters to unite as Emmanuel Macron, whom he describes as “new presidential monarch”.

Jean-Luc Mélenchon said he hoped the voters will refuse on June 11 and 18 to offer a parliamentary majority to Mr. Macron.

After taking an “act” of the victory of the new centrist president on Sunday, the representative of France rebel did not leave a minute of respite to the newly elected. “May the sense of the destiny of our country inhabit you, Mr. President, and the thought of the destitute without right, without roof, without employment, obsessing you,” he said.

“The program of the new presidential monarch is known: it is the war against the social achievements of the country and the ecological irresponsibility,” decided the one who had treated Mr. Macron throughout the campaign of “first communion” or “candidate Of the extreme market “.