Pelosi vs. Trump: Combatants in a historic impeachment showdown that will test them, and the nation 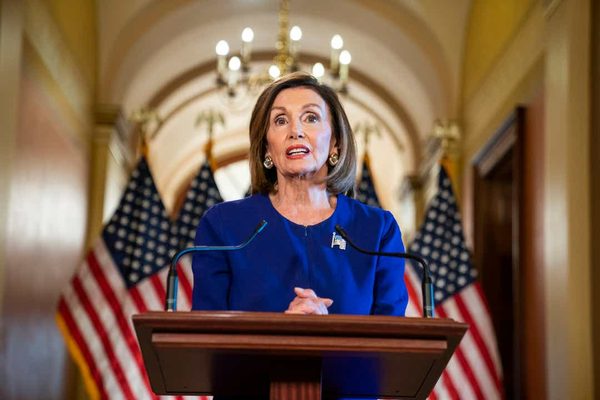 WASHINGTON — They have been the oddest of couples, the President and the Speaker. Or, as Nancy Pelosi might cast it, the leaders of two co-equal branches of the government.

Now, with her decision to launch a formal impeachment inquiry into him, Speaker Pelosi and President Trump are combatants in a historic showdown that will test the nation and shape the legacies of two of the most consequential American politicians of current times.

For the next few months, it will be Trump v. Pelosi.

Since Democrats regained control of the House in the 2018 elections, Pelosi has approached Trump with respect for his office, blunt candor in their private consultations, and scathing rebuke in her public comments. “Mr. President, please don’t characterize the strength that I bring to this meeting as the leader of the House Democrats, who just won a big victory,” she scolded him at their first meeting after the midterms. That exchange solidified her reputation as the most formidable Democratic counterpart he has faced since moving into the White House.

The president has approached her with what seems to be a wary respect. At one point, he even offered to provide Republican votes to help her win the election as Speaker — she didn’t need them — although now he is complaining bitterly about the course she is taking as a “new Witch Hunt!”

They are members of the same generation; she is 79, he is 73. He is the undisputed leader of a Republican Party that has been recast in his image; she is the nation’s highest-ranking Democrat and the party’s de facto leader, at least until a presidential nominee emerges.

‘AKA your worst nightmare!’

Trump is mercurial and impulsive, conferring with friends, family and friendly talk-show hosts but relying most of all on his own gut. He is not a detail man; fact-checkers often conclude various statements he makes are untrue. He draws energy from raucous rallies in which he routinely speaks for more than hour and basks in the adoration of his most fervent supporters.

Pelosi is meticulous, disciplined, controlled. She has held a disparate Democratic caucus together by being the most careful of listeners to other members of Congress, asking their views and understanding their motivations. She is more skilled at cutting deals behind the scenes at the Capitol than with delivering big speeches on the stump.

Still, even Democratic critics who in the past have complained Pelosi has stayed too long in the leadership, that it was past time for fresh faces to take over, see her as ideally suited to this moment.

“We obviously have some policy disagreements but NP (Nancy Pelosi) was the best to lead us into battle against Trump,” California activist Melissa Byrne, an organizer for Bernie Sanders presidential campaigns, tweeted the other day. Veteran Democratic strategist Brad Woodhouse retweeted that and added: “may I introduce you to @SpeakerPelosi Mr. Pres? AKA your worst nightmare!”

Pelosi has been negotiating the narrow path between the most liberal Democratic House members who have been pushing for impeachment almost from the start of Trump’s presidency and more moderate members from swing districts who have worried that step risked sabotaging their chances for re-election.

She had been slow-walking impeachment, arguing for the need to gain support from Republicans and the public first. That changed with Trump’s acknowledgment that he encouraged the president of Ukraine to investigate former vice president Joe Biden, his potential 2020 opponent; a whistleblower’s complaint accuses White House officials of trying to hide the account of the conversation in a server intended for national security secrets.

Now Pelosi has switched to fast-forward mode, suggesting that a House vote on Articles of Impeachment could be held before the end of the year.

“Let us be prayerful. Let us be solemn. Let us try not to make it further divisive,” she said Saturday night in an interview at the Texas Tribune Festival in Austin. “But we cannot ignore our oath of office to defend the Constitution of the United States from all enemies, foreign and domestic.”

From equanimity to alarm

In an interview with USA TODAY a few weeks before the 2018 midterm elections, Trump discussed the idea of Democrats winning the House and Pelosi taking over the speakership with surprising equanimity. It wouldn’t be all bad for him, he mused.

“I’ll be honest with you, if the Democrats get in, I think I’d be able to work with them,” he said in the conversation aboard Air Force One, on his way to a campaign rally in Houston for Texas Sen. Ted Cruz. “If they get in, I think they will find a way to work with me, and I’ll find (it). Otherwise, they can’t pass anything. They want to pass things, too.”

He cited a big infrastructure bill as one White House legislative priority that might actually fare better in a Democratic-controlled House than in a Republican-controlled one.

But the infrastructure initiative has gone nowhere since then. Nor have other measures, including an effort to control prescription drug prices, on which there had been hopes of striking a bipartisan compromise.

Instead, Trump now faces the most dangerous possible repercussion of the new Democratic majority: An impeachment vote that would have been all but unimaginable if Republicans had retained control of the House. The GOP hold on the Senate, which would convene an impeachment trial, remains his strongest bulwark against being removed from office.

Pelosi announced her decision last week in a setting reminiscent of presidents making grave declarations from the White House. She stood outside her suite of offices in the Capitol — it has the grandest view of the National Mall of anywhere in Washington — and in front of a phalanx of American flags. She wore an American flag pin on the shoulder of her blue dress.

Trump, who was in New York for the opening of the United Nations General Assembly, responded to the news with outrage to reporters and on Twitter.

“PRESIDENTIAL HARASSMENT!” he tweeted then. On Sunday morning, he vowed to defeat Democratic House members from congressional districts friendly to him if they vote for impeachment. “Will happen to all of those seeking unlawful impeachment in 50 Trump type Districts,” he tweeted, predicting, “We will win big!”

Trump famously slaps derisive nicknames on those who cross him, from “low-energy Jeb” Bush in the 2016 campaign to “Liddle’ Adam Schiff” now, mocking the House Intelligence Committee chairman. It has been the subject of Washington speculation why he has never tried to make a negative moniker stick to Pelosi.

He typically calls her “Nancy” or a respectful “Nancy Pelosi,” even in tweets that describe her Senate counterpart as “Crooked Chuck” Schumer. There was a reference to “Nervous Nancy Pelosi” in June, but he didn’t keep that up.

It is possible, of course, that’s about to change.