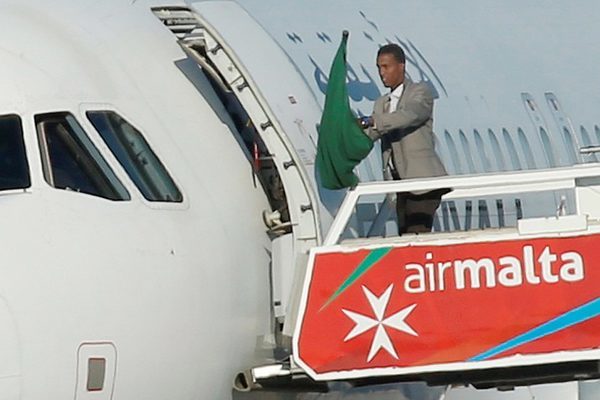 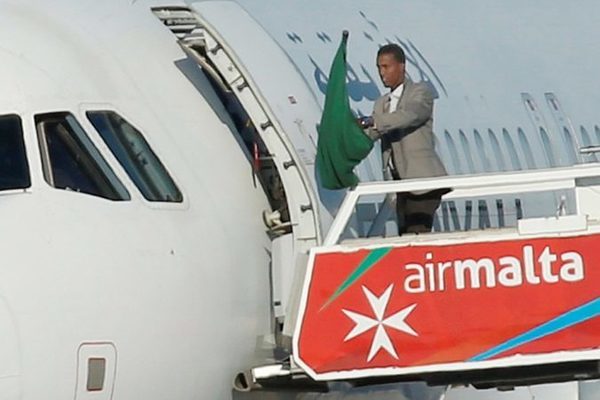 Two men armed with a pomegranate and two dummy guns hijacked a Libyan airliner on Friday to Malta airport where they gradually released 115 passengers and crew members before traveling.

“The last crew members leave the plane with the pirates,” Maltese Prime Minister Joseph Muscat said in the afternoon, who spoke on Twitter throughout the operation.

According to the Minister of Foreign Affairs of the Government of National Unity (GNA), Taher Siala, the hijackers are supporters of the former regime of Muammar Gaddafi who are claiming political asylum in Malta and want to announce the creation of A pro-Gaddafi party.

According to television pictures, one of the two pirates came out of the plane for a few moments while brandishing the green flag of Libya under Gaddafi.

But at a press briefing at the end of the crisis, Muscat denied that the two hijackers, “probably of Libyan nationality”, had applied for asylum.

The first elements of the investigation “show that the weapons used, identical, were forged,” said the Maltese government in a statement, saying that the search of the plane was continuing to ensure that no explosives or weapons Was not there.

The plane, an Airbus A320 from Afriqiyah Airways, departed Sebha, in southern Libya, with 28 women, a baby and 82 men in addition to the seven crew members, heading for Tripoli.

But the pirates forced the pilot to continue about 350 km further north, as far as Malta. It landed at 11:32 am (5:32 am in Montreal) at Luqa International Airport and was quickly isolated, surrounded by soldiers.

The negotiations, led by the Maltese army chief, permitted the gradual release of passengers early in the afternoon, first the women and the baby and then the men, as reported by Mr. Muscat And to measure.

The aircraft landed at Luqa International Airport at 1134 (5.34 GMT) and was quickly isolated, surrounded by soldiers.

Negotiations were initiated with the two hijackers. They “were informed that they should release all passengers if they wanted to discuss. That was negotiated and it was accepted. ”

An hour and a half after the landing, 25 women and the baby were able to get off the plane. Soon, all the passengers, as well as two crew members followed.

According to an AFP correspondent on the spot, the passengers got off the plane very calmly, without running or shouting.

An hour later, the other crew members were free and the hostage takers were detained.

The airport was closed several hours and flights from London, Brussels and Paris were diverted, before being able to use the track again.

Libya has been plunged in chaos since the fall of dictator Muammar Gaddafi in 2011 and several militias are fighting for control of the territory, despite the establishment of a national unity government (GNA), backed by the international community.

The leader of this government, Fayez al-Sarraj, officially announced Saturday the release of Sirte, the stronghold of the organization of the Islamic state.

The loss of Sirte is a major setback for the IA, but there are still jihadists in Libya, as evidenced by a suicide bombing in Benghazi on Sunday.

The GNA hopes to emerge reinforced from the battle of Sirte as it still struggles, since its installation in late March in Tripoli, to establish its authority in a country devastated by the conflicts since the fall of Gaddafi in 2011.

Only local airlines, which do not have the right to enter European airspace, operate flights to Libya, with some routes to Tunis, Cairo, Amman, Istanbul and Khartoum.