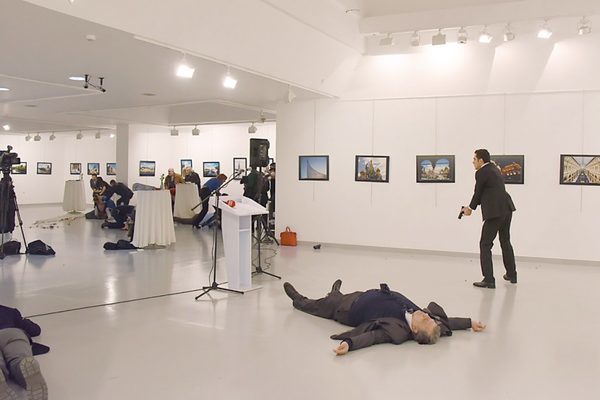 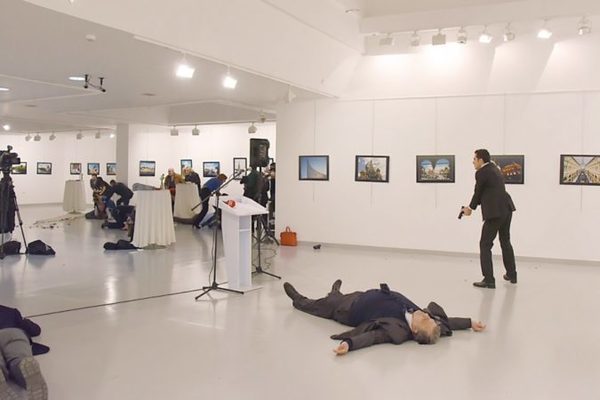 The Russian ambassador to Turkey was assassinated on Monday in Ankara by a Turkish police officer who claimed to take action to avenge the drama of the city of Aleppo, about to be taken over by the Syrian regime backed by Moscow.

The alleged shooter gesticulates a weapon in his hand near the body of a man lying on the ground in an art gallery in Ankara on 19 December.

The diplomat, Andrey Karlov, was shot dead when he gave a speech at the inauguration of an art exhibition in the Turkish capital.

Turkish presidents Recep Tayyip Erdogan and Russian Vladimir Putin, in separate statements, described the assassination as a “provocation” aimed at torpedoing normalization between the two countries, which began in August after a serious diplomatic crisis. They had spoken on the phone shortly after the attack.

In a video broadcast on the Internet, we see the murderer howling, first in Arabic with a marked accent, then in Turkish. The ambassador is lying on the ground beside him.

The man, in black suit and armed with a pistol, shouts “Allah Akbar” (“God is the greatest”) and evokes in Arabic “those who have pledged allegiance to jihad”.

“Do not forget Syria, do not forget Aleppo,” he cries in Turkish twice. “All those who take part in this tyranny will be held accountable, one by one.”

“While the ambassador was making a speech, a tall man wearing a suit first fired into the air and then targeted the ambassador,” Hasim Kiliç, a correspondent for the daily Hürriyet told AFP. The Turkish capital and present on the scene at the time of the attack. Three other people were injured, according to Turkish media.

The alleged assassin was identified by the Turkish authorities as Mevlüt Mert Altintas, a 22-year-old police officer. It was not clear at the time whether the police officer was part of the security device surrounding the exhibition.

A search was conducted at his home, the prosecution announced. His parents and his sister were arrested, according to Dogan.

Born in 1954, Andrey Karlov was appointed to the Turkish capital in July 2013. Married and father of a child, he was stationed in the two Koreas, notably as ambassador to Pyongyang from 2001 to 2006.

According to the Turkish Minister of the Interior, the murderer was “neutralized”. Photos showing him on the ground, visibly dead, with bullet holes on the wall behind him, were broadcast on social networks.

The Security Council will observe a minute of silence on Tuesday in the memory of the ambassador, Romanian Oyarzun told the UN.

The United States condemned “this act of violence, whatever its origin”; UN Secretary-General Ban Ki-moon “a senseless terrorist act”. European Union diplomat Federica Mogherini said he was “deeply shocked” by the assassination, while French President François Hollande condemned him “with force”.

For US President-elect Donald Trump, the murder was committed by a “radical Islamic terrorist”.

Syria, where Russia is providing crucial military support to the regime of President Bashar al-Assad, has condemned an “abominable crime”.

“I do not think there is any significant consequence (on the relations between the two countries), but on a symbolic level, it shows that what happens in Aleppo does not pass with a part of the Muslim population “Said Dominique Moïsi, special adviser of the Institut Montaigne, a think tank based in Paris.

Aykan Erdemir of the Washington-based Foundation for the Defense of Democracy believes that Ankara is “walking on the tightrope while trying to find a modus vivendi with Russia in Syria”, while supporters of the Islamic-conservative party in Power, the AKP, see with a bad eye the support given by Moscow to the regime of President Assad.

“When we see the demonstrations in Istanbul against Russia and Iran and in support of Aleppo, we see that the zealous supporters of the AKP are there,” he explains.

The attack took place at a time when Turkish-Russian relations have been warming up for several months after a serious diplomatic crisis stemming from the destruction in November 2015 by Turkish aircraft of a Russian military aircraft over the Syrian border -Turkish.

It was thanks to a ceasefire agreement sponsored by Turkey and Russia that the eastern districts of Aleppo which were held by the rebels were gradually evacuated since Thursday.

Russia is the main ally of the Syrian regime, which is in the process of resuming Aleppo, the second city of Syria, while Turkey supports the rebels seeking to overthrow it.

A meeting focused on the Syrian issue is scheduled for Tuesday in Moscow between the heads of diplomacy Russian, Turkish and Iranian.