The election of Donald Trump confirmed, failure of the “revolt” 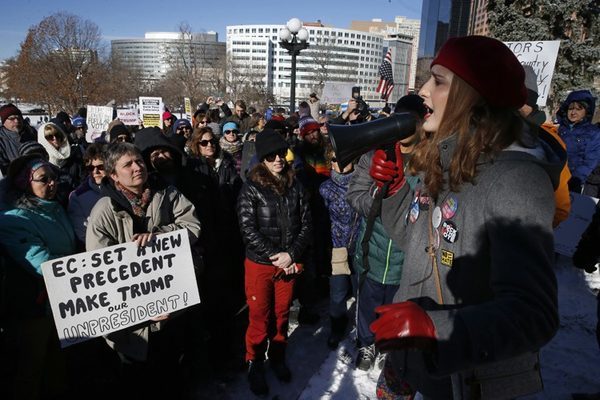 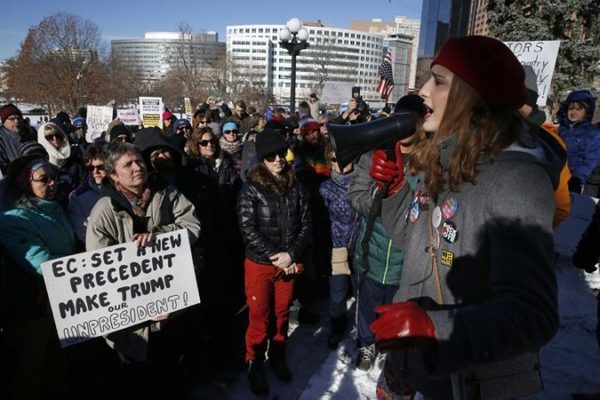 (Washington) The call for revolt of the fierce opponents of Donald Trump has failed: the electoral college, unsurprisingly, confirmed on Monday the election of the real estate tycoon as the 45th president of the United States.

A month and a half after his surprise victory over Democrat Hillary Clinton, Donald Trump has surpassed the 270-strong majority, which means absolute majority, and will succeed Barack Obama on January 20.

In a statement released by his team, the businessman spoke of “a historic overwhelming election victory” and promised to do everything to “bring the country together.”

In a tweet broadcast a few minutes later, he thanked his supporters for this victory gained “in spite of the inaccurate and distorted media coverage”.

The 136 million Americans who went to the polls on November 8 did not directly elect the next tenant of the White House … but 538 large voters responsible for doing so.

Democrats called on them to block the 70-year-old businessman who had emerged victorious.

The voting of these electors, elected or local activists mostly unknown to the general public, usually passes almost unnoticed.

But the personality of Mr. Trump, the extremely aggressive tone of the campaign and the significant advance of Mrs. Clinton with the popular vote gave her this year a special relief.

To achieve their ends, the anti-Trump had to succeed in convincing 37 great voters of the “Great Old Party” to abandon their candidate. Large voters are not obliged to respect the mandate entrusted to them, but it is extremely rare that they derogate from this principle.

According to the final count, Donald Trump won 304 votes against 224 for Hillary Clinton (who still had to surprise pocket the 4 big voters of Hawaii, whose results have not yet been disclosed due to jet lag).

Cruel irony: the few defections were more numerous in the Democratic camp than in the Republican camp: two for Donald Trump, four for Hillary Clinton.

In the state of Washington, which Hillary Clinton had won handsomely, a third of the 12 major voters did not vote in his favor.

A Politico / Morning Consult poll published on Monday showed that Americans had little enthusiasm for this “revolt”: 46% of them thought that the big voters should be obliged to follow the vote of their state (34% thinking the contrary ).

On the desirability of amending the Constitution to replace this system by direct universal suffrage, they are more divided: 46% for, 40% against.

Demonstrations, few followed, brought together dozens of people in the capitals of several states.

In Denver, Colorado, a small group of people braved the cold in front of the local Capitol Hill, holding signs where they asked the great voters to “Reject Trump” or “Join the other brave big voters” who changed their vote throughout history.

Former President Bill Clinton, a major elector of New York State, has slipped a ballot for his wife in this state, which she easily won on November 8.

“I have never tabled a ballot that I was more proud of,” he said, very moved, paying tribute to the election campaign conducted by the former First Lady.

But not all Democrats were in any way favorable to the move.

“Even though I share real concerns about the election and Donald Trump, most major voters will follow, and should follow, the results of the ballot boxes,” David Axelrod, former Barack Obama’s former close adviser, said before the vote.

“A vote to the contrary would tear the country apart,” he added.

On Monday evening, the national committee of the Republican party called on the Democrats to stop their “cynical attempts” to weaken the legitimacy of the vote.