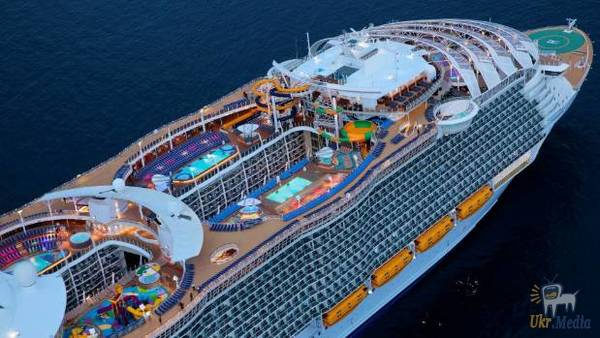 The monster machines: the world presented the world’s largest cruise liner
March 27, 2018 at the port of Malaga, the world was introduced to a new holder of the title of the biggest cruise liner – the liner “Symphony of the seas.”

The new vessel is the fourth ship of class “Oasis”, and, according to the tradition, each ship in this class is slightly larger than its predecessors, reports Rus.Media.

Liner “Symphony of the Seas”, the tonnage of which amounts to 228 081 tons, a length of 362 meters and a height of 72.5 meters, was laid at the STX France shipyard in October 2015. Before arriving at the port of Malaga, the ship successfully passed the last four days of sea trials and tests were started in mid-February, and the ship successfully completed around 80 test its seaworthiness.

Note that all ships of class “Oasis” was the owners of the title of largest cruise ship at different times and they all managed to get in the Guinness Book of records. First liner “Oasis of the Seas”, was born about ten years ago, in 2009, after 2010, the water was lowered liner “Allure of the Seas”, and in 2016 – “Harmony of the Seas”.

Each of the ships of class “Oasis” can accommodate up to 7,000 passengers. 2275 cabin liner “Symphony of the Seas” is designed to accommodate 6 680 passengers, and the number of crew the vessel is about 2,200 people. The liner design “Symphony of the Seas” is practically no different from the design of the class “Oasis”, and on its decks installed a typical set of rides and entertainment, including a water slide, “The Ultimate Abyss”. To this set and added some unique elements, such as, an arena for laser tag and a huge planetarium.

Another feature of the liner “Symphony of the Seas” will be the widespread adoption of new digital technologies. Now, the passengers will be able to do a lot of things, ranging from registration procedures, ticketing, reservation of seats and ending with the orders in the restaurant, with a special program installed on their smartphone.