Trump wants to freeze citizens of Muslim countries and refugees 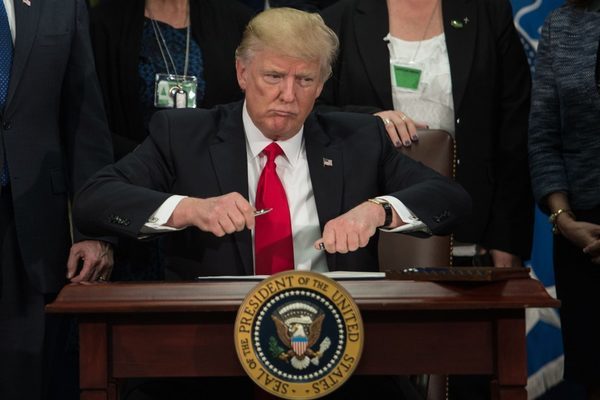 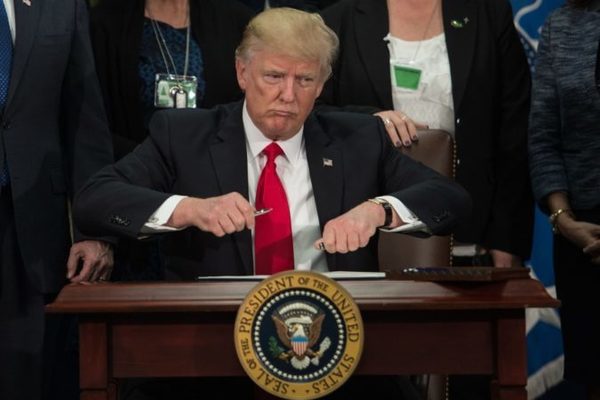 Donald Trump is expected to continue his offensive against immigration by suspending the entry of nationals of certain Muslim countries into the United States and the admission of refugees as the new US president invokes “terrorism” in a world that has become a ” Complete “.

After signing a decree on a project to build a wall on the border with Mexico on Wednesday, Donald Trump may sign another one, perhaps by Thursday, which would block for a month the arrival in America of nationals of Seven Muslim countries: Iraq, Iran, Libya, Somalia, Sudan, Syria and Yemen.

The draft presidential decree, the daily Washington Post published Wednesday, is titled “Protecting the nation from terrorist attacks by foreigners” and it also provides a complete standstill for four months of the US program of refugee admission country at war.

The Syrians, who have fled millions of the conflict in their country, and of which only 10,000 were accepted in the United States in 2016, would be permanently banned from entry.

The new US president, elected on campaign slogans isolating and fighting “radical Islamic terrorism,” wants to halve the number of refugees hosted in 2017, according to this draft decree.

The Barack Obama administration set itself the goal of more than 100,000 refugees accepted this year. The Trump administration would now target only 50,000 of all nationalities.

The new occupant of the White House has defended these measures, affirming Wednesday night on the television channel ABC that it was necessary to act in “an angry world” become “a complete mess”.

“This is not a ban on Muslims, but it concerns countries that have a lot of terrorism,” said the billionaire billionaire.

Even before the decree was officially signed, it was denounced by human rights groups.

“Turning a blind eye to vulnerable refugees is not going to protect the United States,” said former head of the National Counter-Terrorism Center, Michael Olsen, who is now a member of the Human Rights First association. On the contrary, “it will feed the false account of (the jihadist organization) Islamic state for which we are at war against Muslims and not against terrorist groups,” he thundered.

In the eyes of the former US ambassador to Iraq and Syria, Ryan Crocker, “banning the admission of Syrian refugees goes against the values ​​of America and undermines its leadership”.

But President Obama has not been particularly generous with those fleeing the war in Syria since Washington has welcomed only 18,000 Syrians since 2011.

Wednesday, his successor Donald Trump, who has been in power for less than a week, has given substance to his promise as the most emblematic campaign: he signed a decree fixing the objective of the “immediate” construction of a wall at the border with the Mexico to curb illegal immigration.

The Republican president said that “a nation without borders was not a nation” and he reiterated that Mexico would ultimately pay for this project estimated at tens of billions of dollars and that he had evoked as soon as his announcement of Candidacy for the presidential election in June 2015.

But his Mexican counterpart Enrique Pena Nieto said on Wednesday evening “regret” and “condemn” this wall project and pledged to defend the migrants of his country.

More than 11 million irregular migrants live in the United States, some for many years. Nearly half are from Mexico.

Donald Trump also signed another decree on Wednesday to apply more stringently immigration legislation. It plans to reduce federal funding in Washington for the 200 or so “sanctuary cities” in the United States that have been hosting clandestine immigrants for decades.

The president has attracted the wrath of the Democratic mayors of Los Angeles, New York or Chicago. Rahm Emanuel, former General Secretary of the White House under Barack Obama, said: “Whether you are from Poland, Pakistan, India, Ireland, Israel, Mexico or Moldova, You are welcome in Chicago. ”

In Manhattan, more than a thousand people demonstrated Wednesday night to denounce the anti-immigration measures by chanting: “No ban! No wall! New York is for everyone “.

The Dow Jones, once again dismissing the predictions of a market downturn after Donald Trump came to power, broke the 20,000 mark on Wednesday for the first time in its history.

This performance of the New York Stock Exchange, which finished at 20,068 points, was greeted on Twitter by the new US president of a “Superb!”.