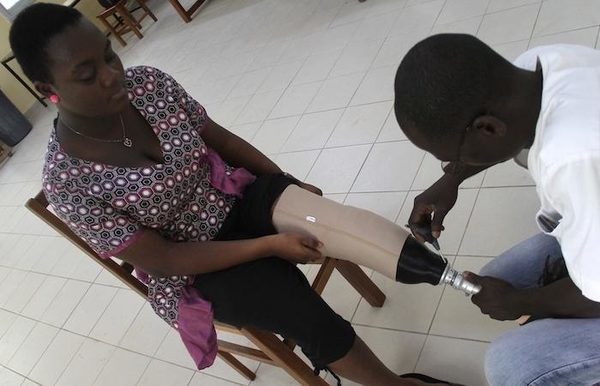 Difficult to imagine how access to a prosthesis can be difficult when one lives in France. But in many disadvantaged countries, to replace an amputated leg is next to impossible. Between initial appointment, adjustment, monitoring, prices of the equipment… the medical history is growing. For the populations in the most isolated, the question therefore does not arise. And life goes on without support.

Recognizing these difficulties, Handicap International made a gesture in the direction of amputees. “In countries with low income, only 5% to 15% of individuals requiring prosthetic and orthotic (…) can access to this service “, points out the NGO. His weapon to remedy it : 3D printing. Since 2015, the organization is working to the development of prostheses printed remotely and on measurement. The trials, carried out in Togo, Syria, and Madagascar, are rather conclusive.

In 2016, the 19 patients were fitted with prostheses of the leg, printed in 3D. This method greatly simplifies the course of care. “Before, we had to make a plaster mould of the stump, go back four or five times to adjust it,” explains a spokesperson for Handicap International to the AFP. Then, the installation of a resin was necessary.

Thanks to 3D printing, only three steps are necessary. A small scanner can create a digital mould, retouched by a orthoprothésiste to meet the standards. The images are uploaded to the printer. The prosthesis is then sent to the care team, which then conducts the establishment.

The 9 month of testing we were able to show that the apparatus complies with the current requirements. The prosthesis is resistant and is durable. But the real argument in favour of this technology, it is the scanner. It can be stored in a bag, which facilitates the movement of teams. The more secluded areas may be affected.

The question of the cost

These results are conclusive. So much so, that before the end of the year, Handicap Internationl provided for the installation of a print center in Togo. And the NGO hopes to reach 200 poses to this date.

Isabelle Urseau, head of Rehabilitation at Handicap International, does not hide his enthusiasm. “3D printing will change the way of working of the professionals with the patients and enable to better organise the services offered, for more efficiency “, she says in a press release.

But it will solve a problem of size : the price. The prosthesis printed by 3D requires the expenditure of 1 200 euros, compared to 70 with the other techniques. The speed has a cost that may be excessive for the poor. The NGOS do not ignore this problem, and is working on its resolution.