A couple goes on vacation with worms, parasites, full feet 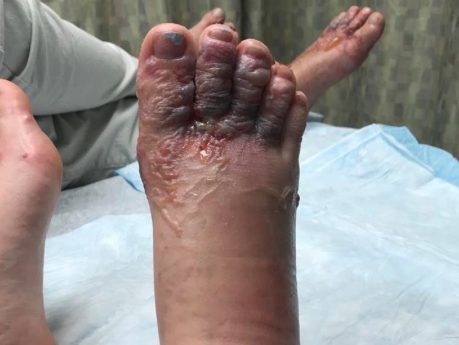 A young canadian couple has had the unpleasant surprise of suffering a violent itching of the feet and the toes to the back from vacation in the Dominican Republic. The itching is then accompanied by swelling and painful blisters as you discover dozens of worm-type parasites hookworm.
If the hookworm can infest the Man, it is only a “dead-end parasitic” : the worm can not reproduce in man, nor to pass into the blood or lymph and one then observes a phenomenon of “larva migrans” cutaneous near the front door of the worm in the organism : the worm remains under the skin, where it moves a little, creating violent local reactions and itching.

Also called “dermatitis vermineuse creeping” or “pseudomyiase creeping”, this condition of skin is caused by skin penetration, the larvae of a parasite, in this case of hookworms.
Hookworms are parasites of dogs and cats (and other wild animals) and are found in their droppings. Young canadians are likely to have caught these parasites by walking barefoot on a beach polluted by animal waste.
Frequent in tropical areas, these anlylostomes cling to the epidermis and then penetrate by puncturing the skin. This is what happened to this Canadian couple on vacation on the island of the Dominican Republic. As reported by International Business Times, they have started to feel itchy in the feet after a walk on the beach, and then intense pain once back in Canada.

“I have a dozen worms in the feet”

It is finally the fourth doctor that they have consulted who made the diagnosis. In humans, the parasite cannot pass into the blood or lymphatic system to start its process of reproduction : the larvae are thus trapped under the skin. They move around a bit, producing the phenomenon of larva migrans, and then eventually die, after having caused violent itching and burning, or even infection.
“I have a dozen worms in the feet, Katie also. It makes me sick to think about it. It is pretty disgusting. It is something that lives in your body and that is not supposed to be there,” said Eddie Zytner (25 years) at the International Business Times. The pictures posted by the couple on Facebook speak for themselves.
“Three of the four doctors we consulted had never heard of these parasitic worms. If your feet start to scratch or swell like mine. Are you going to consider,” advises the young man on the social network. “All that walking barefoot on the beach. So all those who are travelling, check your resort and see if the beaches are clean. It is better to wear shoes on the beach as much as possible”.

Larvae are sensitive to vibrations in the ground

It was in 1874 that this skin disease is discovered, after the examination of a small girl’s afro-american. Over the studies, it is understood that the eggs are released by the stool and that in a supportive environment, that is to say hot, and wet, larvae hatch in 1 or 2 days. In 5 to 7 days they become larvae filariformes of 3rd stage and infestantes. Sensitive, they are very attracted by the vibrations of the ground, which explains that they attack the feet. So be careful.