Act Up : “the movie may give the impression that aids is no longer current” 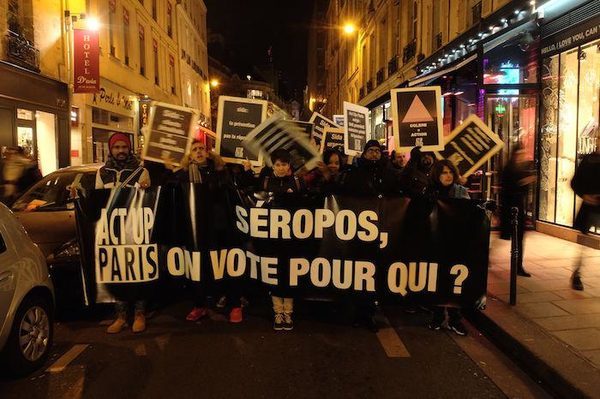 They are nothing more than a dozen to attend the Thursday meetings, in the local Act Up-Paris. The time has passed, since the beginnings of the association of activists mentioned in the film 120 beats per minute, which comes out in cinemas this Wednesday. If Act Up has never abandoned the fight against aids, its staff and its methods have evolved.

But is there really the association, of its activism is radical, its raids and offensives muscular ? Some whisper that it belongs to the past. Others think that the structure today plays the recognised rules of the system, at the risk of being confused with him and dispose of his own DNA, with a touch of rebellious spirit and indomitable.
Mikaël Zenoudan, president of Act Up-Paris, is back on the developments of this association is emblematic.

Have you abandoned the radicalism that was the trademark of Act Up ?

Mikaël Zenoudan : No, even if we hold fewer shares in a public previously, we always use the same methods radical – the die in, the harassment of the public authorities… Only the methods have improved with time. The combat is by far the social networks, which allow us to question persons, and to disseminate information.

The public actions are spectacular, but they do not sum up the action of Act Up. In reality, they only occur as a last resort, after their work is less visible, which is listen and receive it by the public authorities, in order to discuss such issue, such consensus policy that is not going until the end. This was the case for needle exchange programs in prison : we, with other associations of the middle, blocked the decree watered down which was to be published, in order to obtain a satisfactory text. Discussions are in progress.

What is it that sets you apart from today of the other associations in this community ?

Mikaël Zenoudan : We always have this role of “bad dog” in the community. A monitoring role on specific topics – and they are many, because the fight against aids is cross-cutting. We would like the speech strong, which helps put on the public place, specific issues, make them visible to the general public.

For us, the speech termed radical, which is to say that such a minister is a murderer seems to us to be normal. It allows you to put light on the problems. But we work a lot with the other associations. They give us first shout, and then they will work with the institutions.

The fight against HIV requires it to be offensive and radical ?

Mikaël Zenoudan : Yes, because the contaminations are still many in France, especially among young people, and there are always aids-related deaths. Knowledge of modes of HIV transmission and means of prevention is very patchy among young people. Moreover, many of the issues that need to be put on the table, such as the ageing of people living with hiv, with the issue of comorbidities and retirement benefits.

The film has helped to give visibility to an era, but it is not necessary that people remain at a level of a spectator. As it is a historical film, this may suggest that aids is no longer current. Aids is not a simple chronic disease, such as can let him hear the media discourse. Even if we are not more very likely to Act Up, even if it is sometimes tiring, we continue to fight because the fighting remain multiple.