Alzheimer’s : aerobics to reduce the risk 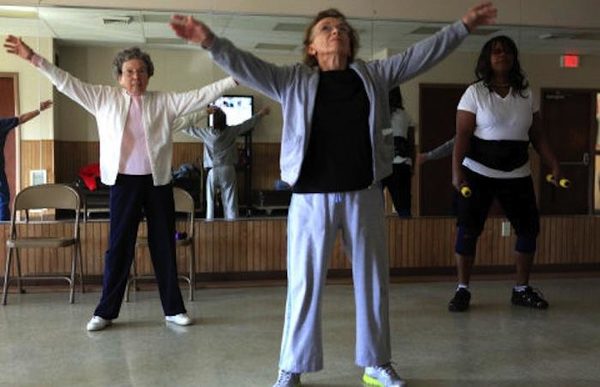 Follow aerobics classes several hours each week could delay the diagnosis of Alzheimer’s disease in elderly people at risk and improve symptoms in patients diagnosed of the disease. Here are the conclusions of a meta-analysis published in the Journal of the American Geriatrics Society.

Led by experts in geriatrics, the work reviewed 19 studies to determine the beneficial impact of the practice of a regular exercise in seniors with (or at risk of developing this disease) Alzheimer’s, a neurodegenerative disease that affects the brains of senior citizens. The research was carried out from medical records of 1145 adults aged on average 70 years of age. Among them, 35% were diagnosed with Alzheimer’s, while 65% were found to be likely to develop the disease.
Three times more improvement in those who participated in aerobics

In examining the data they had, the researchers discovered that people who performed regular aerobic exercise, multiplied by three the improvement of their cognitive functions, compared to those who chose to workouts aerobics and strength training exercises. The patients who practiced any physical effort, regular exhibited a significant decline in their cognitive functions, say the researchers.

Currently, the World Health Organization (WHO) recommends that people aged 65 and over to practice 150 minutes of moderate exercise per week, or at least 75 minutes of intense activity (or a combination of these two types of efforts). The scientists say their study could be the first to demonstrate that the exercises aerobics can be more effective than other types of exercises to preserve cognitive function in patients with Alzheimer’s disease or in the elderly at risk. The researchers note, however, the need to conduct future research in this direction to support their conclusions.