Ariel Winter: The star of The Modern Family couple with a famous actor

The pretty brunette has found love. 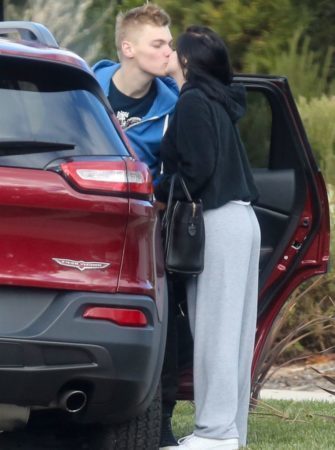 It’s official, Ariel Winter has found love! The actress who plays Alex Dunphy in the series Modern Family formalized with her new lover. The pretty brunette of 18 years was photographed this Saturday 26 November, kissing the actor Levi Meaden. The couple exchanged a tender kiss in the rain while the output of a Studio City restaurant in Los Angeles. Enough to delight photographers Daily Mail , which published a series of photos on the site.
Ariel Winter was single since his split with supermodel Laurent Claude Gaudette. After two years of romance, they had separated last summer, shortly after the emancipated actress had been reducing the chest to relieve his back problems. But rumors of a romance began to rise earlier area this month, and then Ariel Levi were offered short holiday on the Mexican beaches of Cabo San Lucas.
The 29-year-old actor is not completely unknown to the battalion since he began his career at the age of 12. Since then we have seen in the television series Aftermath and in The Killing , broadcast on Netflix. It will also be showing the blockbuster Pacific Rim: Maelstrom , whose release is scheduled for 2018.
Besides his career, Levi Meaden love animals. With his roommates, they opened a shelter home for dogs about to be euthanized and care for them until a family comes to adopt them. A young man with a big heart who also love to cook, and movie fan. ” I spend most of my time watching old movies. I was a cook for many years. Today, cooking is a way to relax. I also try to write every day ,” he -t he told in an interview to UpfrontNY . We know that is a feast!