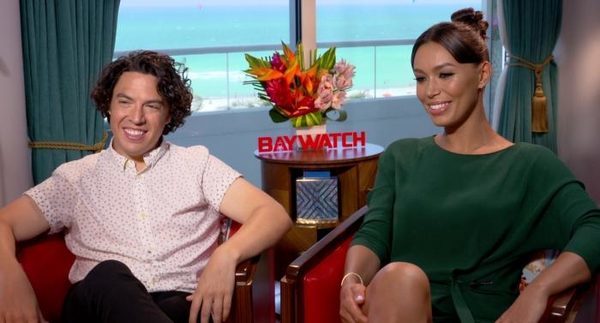 Jon Bass and Ilfenesh Hadera are among the new lifeguards in red swimsuit in Baywatch, in theaters since June 21. Discover our excluded interview!

Before, there was David Hasselhoff and Pamela Anderson. But that was before. The era of the cult series Alert to Malibu is over, place to the film Baywatch . A much more fun, much more trash and much more crazy version of the 90s series, with Dwayne Johnson and Zac Efron to take the torch of rescuers in a red swimsuit. Alexandra Daddario and Kelly Rohrbach are added to them, as well as Jon Bass and Ilfenesh Hadera. The latter embody Ronnie , a completely new in-love CJ girlfriend, the slow-running blonde (Kelly Rohrbach), and Stephanie Holden , a confirmed rescuer who forms a shock duo with The Rock. During our stay in Miami, We had the chance to meet them. If you want to discover what is their worst memory of beach, it is here that it happens!
Alert to Malibu is a series that everyone knows. But what made you want to be part of this adaptation exactly?
Jon Bass: For me, it was Pamela Anderson. I love it. It was sincerely my first crush. I was completely crazy about meeting her, shooting a scene with her. I even took a picture with her which I cut Ilfenesh Hadera. And then Alert in Malibu, it is also the beach, the fun and of course the idle.
Ilfenesh Hadera: I grew up in New York, so Alert in Malibu is for me a world totally apart, with beautiful kids and beautiful kids, in a swimsuit on the beach. And then nothing but the place, Malibu, is amazing. Where is this place and how are we going?
Compared to the original series, what does this new adaptation bring back, according to you?
Ilfenesh: In the film, everything is more crazy. Humor is more crazy. The action is more crazy. Sex is warmer.
Jon Bass: Yes, there are a lot more chase races than in the series, and more nudity!
Ilfenesh: Basically, all you can not do in a TV series, we did it in the movie.
How would you describe your characters, in three words?
Jon Bass: Fun, funny and sexy! (laughter)
Ilfenesh: I would say that she is a strong, committed and affectionate girl.
How did you put yourself in the shoes of your characters?
Jon Bass: My character was not part of the original series so I could do what I wanted. And I was mainly inspired by my own life.
Ilfenesh: For me it was easier, since my character had been interpreted by Alexandra Paul in the original series. So I got a little inspired but yes, I was also inspired by my own life.
What is your worst beach memory?
Ilfenesh: I do not have a bad one. When I was little, I spent my holidays with my grandmother in Rhode Island. And sometimes the Atlantic can be violent. And so I found myself embarked by a wave, I felt like being in a washing machine, I did not know where the surface was and where was the bottom. It was horrible.
Jon Bass: For me it was in the Dead Sea. It’s nothing but salt, so if you go in with scratches, it really burns a lot. And I had scratches on my buttocks. I really suffered!