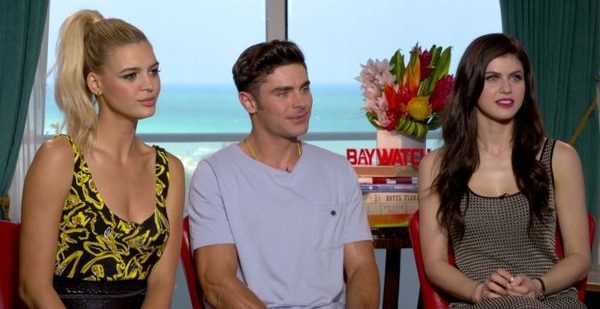 On the occasion of the release of Baywatch in theaters, we met Zac Efron, Alexandra Daddario and Kelly Rohrbach. Discover our exclusive interview!

More than twenty years after the Malibu Alert cult series began , rescuers in red swimsuits are back on California beaches in Baywatch, which we give you 3 good reasons to go see it . Except this time, it’s not David Hasselhoff and Pamela Anderson who are watching the beach, but Dwayne Johnson, aka The Rock, Zac Efron , Alexandra Daddario and Kelly Rohrbach. The latter includes the role that made famous Pamela Anderson: CJ Parker . And like her, she runs in slow motion. But she describes herself as a “warm, accessible and tenacious person” . As for Zac Efron, he plays Matt Brody, A former Olympic swimming champion slightly imbued with himself and Alexandra Daddario, plays the role of Summer Quinn, a girl who is determined to prove itself. For the release of Baywatch , we went to Miami to meet them and here is our interview!
Alert to Malibu is now a TV series that everyone knows. What was it for you?
Kelly Rohrbach: I think it was life in California. A simple life and easy to live, healthy activities, the beach … And that’s why I moved in there! It’s so great!
Alexandra Daddario: Yes it’s glitter and glamor. And I especially remember the actors of the series, who became very famous. Everyone knew who Pamela Anderson was coming from, and then everyone was talking about David Hasselhoff. They had glamorous and exciting lives. Everyone knows them and so it’s cool to be part of this world there.
Zac Efron: And in addition to all that, you quickly attach to the characters of the series and their history. The characters of Pamela Anderson and David Hasselhoff, for example, were brilliant. And still today, they are attached to this role and that is why people love them so much. So it is rather yes to be part of this world there.
Kelly: I think what’s interesting about our adaptation is that all the elements of the original series are there, but it’s also a more modern, more punchy and more crazy version!
And what exactly made you want to be part of this adaptation?
Kelly: It was funny. It was so funny. When I got the script, I thought I had to do it. I obviously saw the original series, I’m a big fan. But this is a new version much more trash and much more fun.
Zac: As Kelly said, the platform already exists. It is magical, it is a world both dangerous and sexy. The creators of the series suggested adapting it to the screen and it seemed like what the world needed.
Alexandra: Yes, I think right now, we need to go to the cinema to laugh for two hours. And that’s exactly what Baywatch is proposing.
Zac: It’s just very funny. And completely crazy.
Kelly: Yeah, it’s like having summer in a bottle. There’s sand, nice kids and nice kids, tanned bodies, abs. There’s The Rock!
Zac: And it’s full of action. It’s really very fun!
In three words, how would you describe your characters?
Kelly: Warm, accessible and strong.
Zac: Doped, sick and radical!
Alexandra: Smart, strong and funny.
Kelly: And sexy!