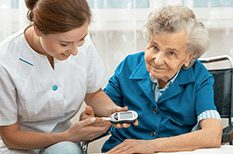 A study published in Plos suggests that diabetes is associated with a 40% increase in risk of dementia in older Americans. The physiological pathways linking diabetes to cognitive impairment remain largely unknown. Given that the cognitive deficit is a major cause of loss of autonomy, and that it is a barrier to therapeutic adherence, strategies to improve care of people with diabetes should take into account the cognitive level of this population.

From the age of 50, men and women with diabetes are aware of a beginning of cognitive decline 3 to 4 years earlier than people who do not have diabetes.

The diabetes has decreased the total life expectancy of five to seven years and a life expectancy of cognitively healthy four to six years. Compared to persons without diabetes, those with diabetes lived about a year less in having poor mental health. “The cost of diabetes on the duration of life is mainly due to the reduction of years of cognitive functioning normal, ensures the lead author of the study Dr. Diaz-Venegas. If in diabetics, the progress in terms of mortality, are not associated with improved cognition, the burden of cognitive-associated diabetes could increase with time.”