Donald Trump: On his way to his inauguration, hand in hand with Melania 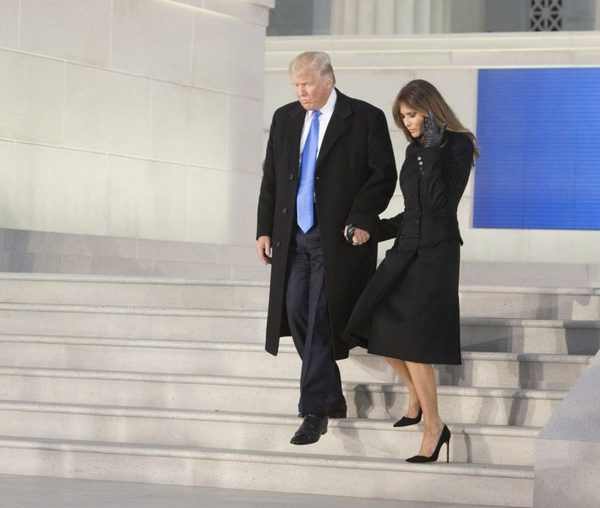 All eyes are on Washington. 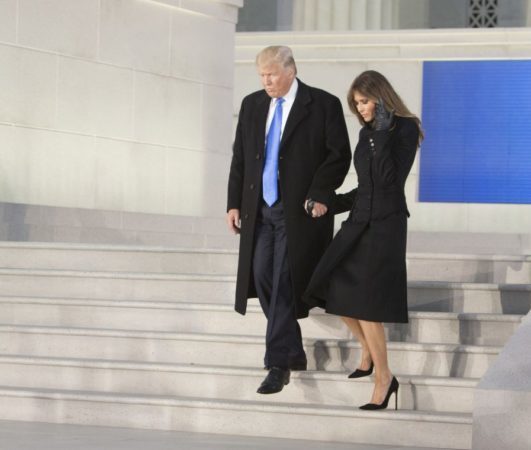 This is the D-Day for Donald Trump . Elected as the 45th president of the United States in the November 8 election against his rival Hillary Clinton , the 70-year-old politician arrived in Washington on Thursday (January 19th) to officially take office. The traditional rituals of the transfer of power thus began several hours ago and the former Republican candidate was welcomed Friday around 9:45 (local time) by Barack Obama to the White House.
The day before, alongside his wife Melania , to his children and grandchildren , the new POTUS landed at the military base of Andrew (Maryland), where is parked the presidential plane Air Force One . After lunching with the leaders of the Republican majority in the Senate and the House of Representatives, he went to a ceremony at the Arlington Military Cemetery to pay tribute to the veterans. His future vice president Mike Pence was at his side.
A few hours later Donald Trump and his family made their way to the Lincoln Memorial to attend the inaugural concert in which group 3 Doors Down and Lee Greenwood agreed to sing. Installed on the steps, Barack Obama’s successor appeared smiling, hand in hand with his wife, before saluting the marble monument and raising his fist in the air, victorious.
IVANKA TRUMP IMPLORES AMERICA TO “LEAVE A CHANCE” TO HER FATHER
Prior to the official Blair House residence, Trump couple went to dinner Candlelight organized in thanks to donors and supporters of the presidential campaign. Molded in a strassed dress, the new First Lady (whose outfits are already scrutinized in the smallest details) stole the show to her husband.
On Friday at 11 am, Donald Trump will take the oath and deliver his investiture speech at the Capitol. Several politicians are expected to attend, including former presidents Jimmy Carter (92), George W. Bush (70) and Bill Clinton (70). The latter will be accompanied by his wife Hillary . A lunch will then be organized with elected representatives of Congress, then will come the parade of investiture. The new president and vice president will run for approximately 2.4 kilometers along Pennsylvania Avenue, which connects the Capitol to the White House.
Several thousand people gathered in the streets of Washington. Hostile demonstrations took place Thursday night in New York, with celebrities like Robert De Niro accompanying residents, and Friday morning in Manila in front of the American embassy with hundreds of Filipinos. Others were expected Friday in Prague, Brussels, Berlin or London. Donald Trump’s opponents, scolded by his thunderous and scandalous statements, denounce his impetuous character, sometimes misogynistic, sometimes racist. As a reminder, the president-elect was accused of sexual assault by a dozen women a few months ago. ” We are going to bring our country together ,” he said Thursday in the face of protests by his opponents. ” Give my father a chance ,” implored her daughter, Ivanka Trump .