Funeral of Russian prince Dimitri Romanovich: His widow and his relatives in mourning 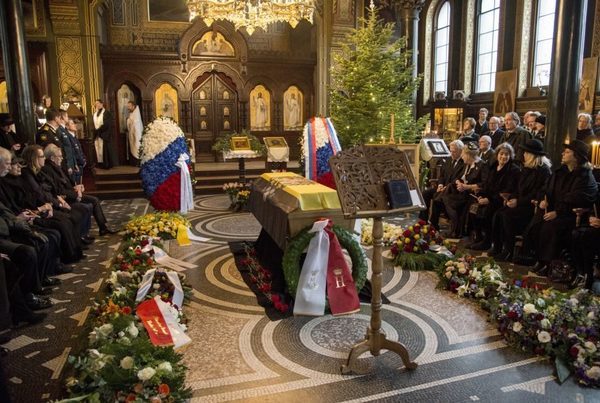 A solemn and solemn farewell, in a small committee, to this great patriot and historian. 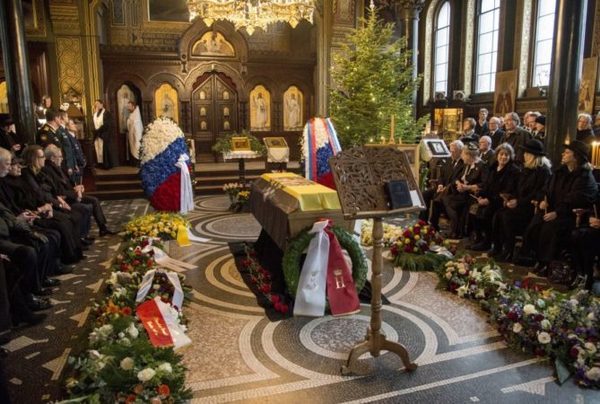 Prince Dimitri Romanovich had made the Kingdom of Denmark last homeland of his life in exile, and this is in Copenhagen that his relatives gathered to bid him farewell two weeks after his death in ‘age of 90 on the evening of December 31, 2016 , occurred in a hospital where he was admitted following a sudden deterioration in his health, his funeral took place this week in the Danish capital.
Two years after the death of his elder brother Nicolas Romanovitch, the Romanov House, of which Prince Dimitri had taken the lead, is again mourning. On Tuesday, January 10, a funeral mass was celebrated in the Russian Orthodox Church of St. Alexander Nevsky, in memory of the man who had received the order of Alexander Nevsky in Moscow in October 2016 – resurrection of the Imperial Order of The same name was abolished in 1917 by the Bolsheviks. This honor reserved by Russia to the greatest servants of the Motherland had been granted by President Vladimir Putin and delivered by Russian Prime Minister Dmitry Medvedev, who was very saddened to learn a few weeks later his disappearance: ” C. ‘was one of our most formidable fellow. during our face-to-face, I realized a little more each time he had never away from Russia and he always helped his country with concrete actions , “he had then reacted.
Around the Princess Theodora (born Dorrit Reventlow), widow of Prince Dimitri, many people who had moved far to the farewell to this direct descendant of Tsar Nicolas I of Russia: ” An important chapter in our shared history touched his term. Dimitri Romanovich has done much to restore and strengthen the ties between the Russian diaspora and Russia “, held Wednesday, January 11 with the news agency Tass, after the burial of the prince The Vedbaek cemetery (north of Copenhagen), Nikolai Dobrynin, a close relative of the deceased, who came especially from Spain.
RUSSIAN AT HEART, CITIZEN OF THE WORLD
Dimitri Romanovitch, born in 1926 four years after Nicholas of Grand Duke Roman Petrovich, cousin of Tsar Nicholas II, spent a decade in France, where he was educated in Russian culture, before his family Settled in Italy in the mid-1930s. At the end of the Second World War, the clan, threatened and underground due to its affinities with the Italian royal family, exiled to Egypt, where the young Dimitri Works as a mechanic in a Ford plant. The reversal in 1952 of King Farouk will again make the situation of the Romanovs delicate, leading to his return to Italy. A year after his marriage to Johanna von Kauffman in 1959 in Copenhagen, Prince Dimitri Romanovitch settled in Denmark, where he spent a career in banking until his retirement in 1993. That year, widower For the last four years, he has married Countess Dorrit Reventlow (who had been a widow since 1985) in Kostroma, where the coronation of Michael I of Russia, Romanov’s first czar, took place. It is the first union of a Romanov on Russian soil since the revolution of 1917.
If he did not have children, Prince Dimitri Romanovich had a sense of family and altruism, investing on the one hand in the perpetuation of the history of the dynasty within the ” An association of the Romanov family, of which his father had laid the foundations during his lifetime, and on the other hand, in various philanthropic actions in favor of the Russian people, especially in hospitals and orphanages. The Association had in 1992 in Paris set up a charitable fund for Russia, of which it was the director. He subsequently established another fund in 2006 in his own name.