Game of Thrones season 7: A confrontation between Daenerys and Euron Greyjoy? (SPOILERS) 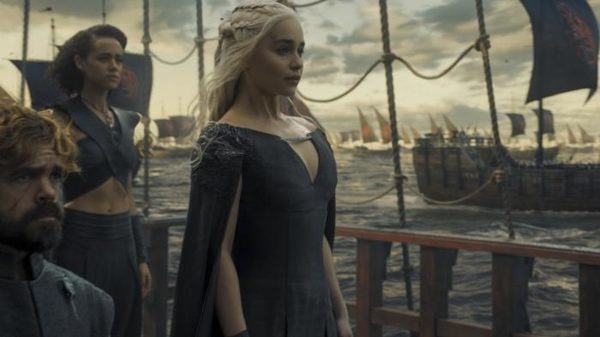 It is soon the arrival of season 7 of Game of Thrones on our screens and the spoilers already invade the net. Euron Greyjoy and Daenerys could soon come to blows!

Not a single day passes without having its lot of spoilers on the series event we all expect, Game of Thrones. The fans lose their head just two weeks from the big return of the show on HBO and on OCS! The trailer of the season 7 of Game Of Thrones has revealed suspense, action and many more intrigues to solve! Winter is finally at the gates of Westeros, the white marchers are heading towards our favorite characters, far too busy to fight one against the other for the iron throne. And it is very likely that Euron Greyjoy and Daenerys are coming to the confrontation in the episodes to come. We love the idea! Not you ?

Remember, Euron Greyjoy landed in GOT last season, killing his brother and chasing his nephews and nieces (Yara and Theon) to take power on the Iron Islands. He had shown interest in the pretty Queen of Dragons. Euron wished to take her as wife to unite the Seven Kingdoms under their two names. But he still does not know that Yara and Theon joined the powerful Daenerys army at the end of the sixth season. It is therefore very likely that Euron Greyjoy is changing his plan for the Dragon Queen, who is on his way to Dragonstone, just like Euron who is looking for it. We feel the joys of their next meeting! The trailer has teased us a beautiful battle at sea, we bet it is theirs! And if you too are a fan of this series, come vote for it at the World Series Cup!